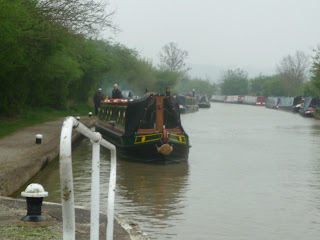 We set off this morning in between showers and after a bit of a queue through the locks we got to Calcutt marina at around 12.30pm.
Alan and Dave from Axoim propellers, (http://www.axiompropellers.com/axioms-propellers-for-narrowboats ) were waiting for us to arrive. We moored up along side the ramp which had a large trailer like thing with four tall legs on it. The guys from Calcutt then took the tiller of Derwent6 and backed up into the marina. The trailer thing was then lowered into the water with just the four tall legs showing above water level. Derwent6 was then steered between these legs and with still a lot of forward momentum was Oinked out of the water. It all happened so quickly. 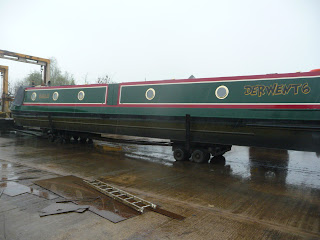 So Derwent6 was high up out of the water and we then got the step ladders and recovered the camera, scrubbing brush, sponge and the hull protection paint.
It then started to tip it down..... below the water line Derwent6 was covered in a green slim and algae which we started to scrub off, while Dave and Alan started to remove the old prop. We were all getting soaked, but it helped in washing down the hull.
It was all done in about 45mins and we were ready to go back in the water. 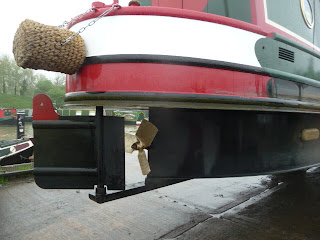 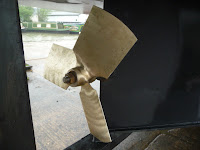 One of the guys from Calcutt turned up and said "who's going to steer the boat"..."blimey it better be us then" we said. With that we had to climb up onto the trailer and onto the back of Derwent6. We started the engine and we were lowered into the water. The Bow seemed to come right up in the air and we could have done with a prop on the bow. We were worried about the plates again and other things sliding about. 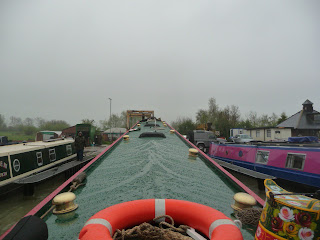 Once Derwent6 hit the water she glided back in reverse with no noise...a sigh of relief...

We took Derwent6 back to the side mooring and loaded our gear back on. Alan and Dave then came on for a spin and we took Derwent6 for a tour of the marina. The prop performed perfectly.
The first thing you notice is the power through the tiller in reverse where water is pulled past the rudder. The second thing was that water was flowing both sides of the bow evenly in reverse. The third thing was how quick it stopped.
There seemed to be so much more power available when needed which improved the turning circle. When mooring back up, it took some getting used to because you had to watch the power.
The great thing for us was that we couldn't hear the noise...We had no singing prop. yipppeee!!!
Alan and Dave from Axoim will be at the Crick show. They left us after seeing that we were happy and with no noise we were over the moon. 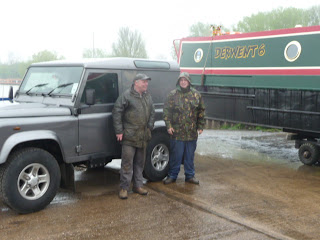 We then left the marina and headed through the locks..Derwent6 feels a different boat and it will take a while to get used to it's new handing. We still had that nice slow speed for going into locks and stopping was better with the stern not pushing out as much. There was no need to rev the engine, as idle speed was sufficient for the correction of any movement.
We then got Diesel at Calcutt which is in between the locks...Good move as they weren't worried about your split and at 59p a litre and a empty tank we were over the moon again.
When we got to the top we could now do some cruising, we passed some moored boats and we've got to say the wake....well there wasn't any... you could creep pass boats and no-one would know you were there. When we got up to normal cruising speed (about 1500rpm) we found out we were going too fast, so backed it off to 1200rpm, this will be a massive saving on fuel comsumption.
We only went about a mile and the rain started again, so we moored up for the night. We took off our wet things and when entering the boat found that the candle on the cratch table had moved right to the end...our luck was still running!
Well the verdict on the prop?....too early to tell !!!
The good points already noted are
1/ The noise has gone!
2/ Lower rpm on cruising, lowering fuel comsumption
3/ Less wash when passing moored boats
4/ Easier to moor with less stern movement in reverse
5/ More power for stopping and turning
6/ Less tiller vibration
We did notice a lot of wash when manovering about because of the pressure passing the rudder, and water noise on the stern didn't seem much different than the screw prop (and this was with the diesel tank empty and full), but we are still finding our way with it all.
We are looking forward to going out tomorrow....weather pending!
Posted by Del and Al at 5:18 PM

Sounds great hope all goes well with the prop,it sounds like it has so far.
Thanks again for a great b/holiday
looking forward to the next visit.
Best wishes bernie & family.

Glad your prop seems to be sorted - hope you don't get any more problems in that area. It looks very unusual - all the other props I've seen/felt have rounded blades. I'd be interested to know the reasons for that design, and the advantages (presumably) over the conventional rounded sort.

Hey Guys it all looks good, I have sent request to Axiom for information on the the strength of your experience so far. give us a shout on our email with your dog and bone so I can quiz.

sorry here it is