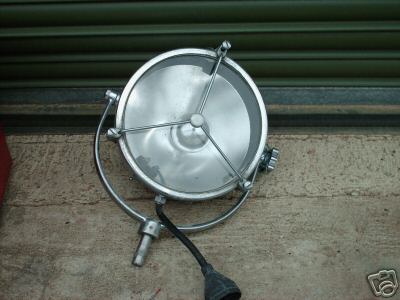 Well we found it !!
A 1960's Fire engine searchlight which we wanted to go on the front of Derwent6..We found it on Ebay and had to collect it from a fire engine collecter, who had a fire engine (Dave) in Oxfordshire. What a great house they had it full of old collecters items and memorabilia of the 60's.

So now have to get it de-chromed as it is made of solid brass, it still has the original 100 watt bulb and can give a beam up to 1006 metres (should light up the tunnels)
Posted by Del and Al at 10:01 PM No comments: