We could hear the rain pelting down on the roof this morning, so the walk we had planned will have to be put off until tomorrow. This is the time to do those jobs you put off for a rainy day...and you will see why!
The manual pumpout had stopped working three weeks ago and we were sent a new seal and valve kit from a Fernwood supplier. It was time to have a go at replacing them, so hold your nose......
First we had to dismantle the cupboard just to get to the pump. We then had to disconnect all the hoses (not a nice job) and then dismantle the pump (even worse) 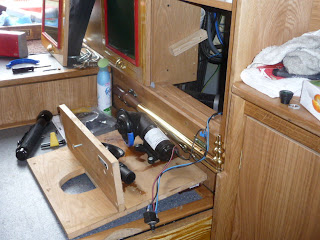 But the good news was that we found a small piece of foam insulation, which must have fallen into the tank on build, stuck in the rubber valve. This is the second time that the pump has stopped working after finding swalf from inside the tank, first time. This had distorted the rubber valve, so we had to replace it.
After putting this back together it started working much better. It took longer to disinfect the cupboard and the bilge when we had finished.
We then pumped out the rest of the tank, but the gauge still didn't work. We have now got more freedom on journey planning, by not having to worry about the waste tank.
This took up most of the day with stops to watch the Grand Prix qualifying, lunch, etc
The weather brightened up late in the afternoon, but we didn't feel like doing anything.
Al made some lovely cheese scones and some eccles cakes 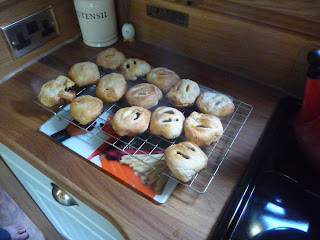 There is never a dull moment is there when doing boat jobs, and they always take longer than expected.
I would love the recipe for the eccles cakes, if you would be so kind lol. Jo