After doing all the brasses yesterday...yes it's our fault it's raining today..

We had to get up early because we were expecting Mr Tesco at around 10.00am with a big shop...So it was clear out all the cupboards so we could get the extra tins and of course, beer on board. Drink is the biggest problem when doing a shop, because of the weight and carrying it back to Derwent6. It's a nice feeling when a guy jumps out of his van and justs plonks a couple of slabs on the bow. He turned up bang on time! 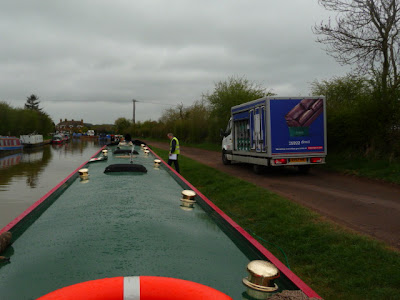 We had to fill with water today so pulled back onto the water point. Just at the same time two hire boats decided that they needed water too. But luckly one of the taps didn't have a knob on it and the hire boats never had a pair of pliers. Our hose reached even though we weren't on the water point, but still a hire boat wanted our place. After having to move around them, (because it was easier) they then found their hose didn't reach...all fun!
Then when we were having a bite to eat, we then had some guy hanging off the gunwales on Derwent6 resting his boat along ours waiting to go in the lock..."Keep that pushed off" we shouted. And with that he grabbed the centre rope and walked across our stern, without even a sorry!...well he copped it big time, manners cost nothing!!!!!
Well we've hoovered, done the brass liners and and cleaned the oven, but in the process chipped a cup, dropped the ecofan and Al bashed her head on the stern hatch.
At 7.45pm Bernie, Sarah, David and Hannah turned up.....yes! we are out on the Easter parade! We then went over to The New Inn and had a bite to eat...we would just like to say that the food had improved and we were served desert after 9.00pm, much better then our last experience.
Some more good news is that Derwent6 is now booked in after Easter, to have its propeller change.
Posted by Del and Al at 2:39 PM

Have a lovely Easter Al and Del.
We have not used the tesco delivery yet, maybe we will give it a go at some point. It would certainly save my shoulders from carrying a rucksack.
I totally agree with you manners cost nothing, but it seems that no one has any manners anymore. I can imagine you were both seeing red and we would have been the same.
We are now going into dry dock for a week in Uxbridge. Keep smiling. Jo x

You both have a great Easter as well Good luck on your dry docking.. x