After a great week on N.B Thema it really focused the mind onto Derwent6.

So after leaving the marina, we headed on up to the guys who will be doing the 15" grand union portholes and watched liquid brass being poured into casts. Hopefully we will be able to help pouring Derwent6's portholes soon. We were asking about some double glazed portholes which are in development..watch this space !!

From there we went back to Fernwood Craft as we need to confirm build start dates and some other issues we had with stern deck height and manual pumpout points. We found out that our engine build slot has been booked with Beta marine. Derwent6 will have a Beta BV2203S which is a green line engine encased in a box to make it as quiet as can be, but we still haven't got the generator sorted out because Beta do a 3.5 kVa which will be too small for Derwent6 and a 7 kVA which is to large. We understand that Beta marine have a 5 kVA generator in development...watch this space !!!

Well it looks like it could be all go in early May (and don't worry, we will be there to watch the base plate go down). So we are working hard again, double checking the shell spec's and now looking at interior fabrics etc.
Our next meeting with Fernwood will be in June after the Crick Boat show which is at the end of May.

We have now purchased two of the bike's featured earlier in a 18" and 20" frame which had to be brought over from the State's, and are very difficult to get. So we now have our old bikes up for sale! ( a good buy for somebody)

We have made some slight changes to the plans of Derwent6, one being that we were going to have glass panels made up for the side doors, but now feel we will have perspex panels instead because of the weight, and also they don't have a condensation problem, and won't smash when dropped.
N.B Thema has perspex, and it won't scratch if looked after. Thema is fourteen years old and they still look as good as new. Also these panels can be swapped for fly screens, for those hot summer night's. 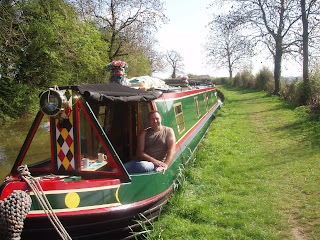 As Pat and Keith decided not to use Thema over the Easter period (due to bad weather last year!), we had the opportunity to take her up to her new home at the Welford arm marina, and unluckily for them, what a fab week it was. Apart from the boat traffic which we knew would be heavy, the sun shone everyday and spring blossomed, and spending time again on the cut gave us a new burst of excitement about Derwent6 and our new life afloat.


Setting off from Calcutt on Thursday evening we moored at bridge 103 for the night, and then moved, on Good Friday, to Norton Junction. 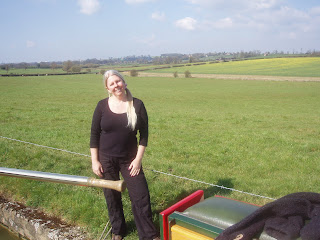 Check out our back garden !
After a few beers at The New Inn we slept so soundly only to be woken up by the cows licking the condensation off the side of the boat !!!!!

Saturday saw us up the Leicester branch of the Grand Union and the Watford flight. Knew this would be busy, and you can see from the picture, it's a tough life waiting. 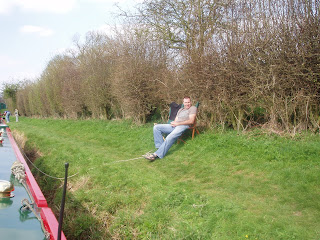 Easter Sunday, after the Grand Prix, we headed towards Crick tunnel and had a pleasant surprise the other side by seeing N.B Balmaha outside the marina. We have followed their blog for many months and it was great to see them on our travels. Hi Mo and Vanessa ! (thanks for the photo on your blog...it's a first for us !) 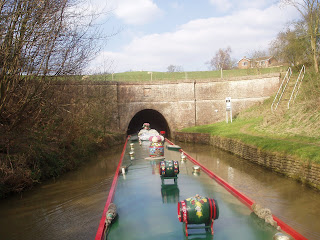 Foxton loomed, together with the crowds..... Gongoozlers in their thousands!. Did a bit of people watching as the crowds went by as we moored at the top of the fight for the night.

When the crowds had left we put the wine away and then walked around the locks and the new attraction, the incline plain. 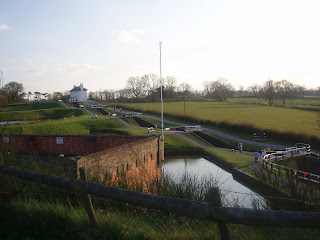 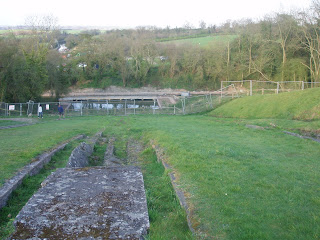 After a good meal at the Foxton Inn we stumbled back to the boat.

Up bright and breezy the next day (Easter Monday) we put out name down for our 8.00am descent. Through the locks, no problem, and headed up the harbro' arm, and had another pleasant surprise.
We passed another boat, whose blog we follow, N.B Gypsy Rover. Hello Dot and Derek, thanks for the mention on your blog as well. It was great to see you. Carried on up the harbro' arm but no mooring available in the basin, so turned and and headed back to one of our favourite spots....... the middle of nowhere.

Tuesday morning we passed N.B Gypsy Rover waiting to go up the Foxton flight as we carried on to Debdale. This is where Derwent6 will be launched so we were keen to suss out the area. 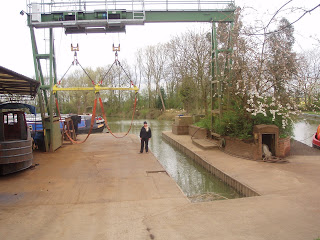 Back up through Foxton late on Tuesday (thanks to a kind lock keeper) and had another great garden at the top of the flight. 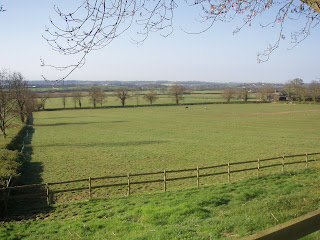 Wednesday was a beautiful day, and we moored up just before the Welford arm, after going through the Bosworth tunnel, and watched the gliders seeking out their thermals in the sky. 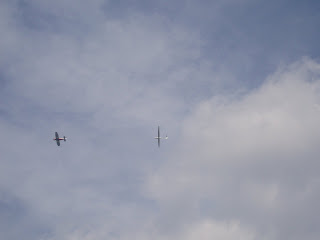 We had to drag ourselves away as we took N.B Thema back to her new home at the end of a fabulous week, which left us so looking forward to Derwent6, and a time when we don't have to take our boat back.