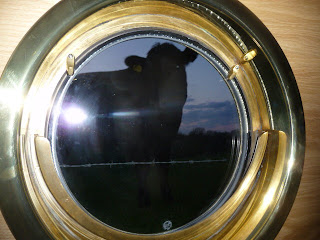 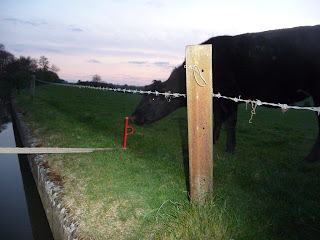 Woke up today to a cow mooing right outside the porthole in the bedroom and another one trying to pull the pins for us....Who needs an alarm clock!

As we opened the cratch cover two swans came floating by through the suns rays. 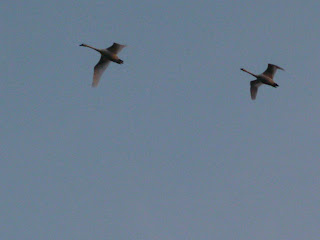 It was a lovely warm day and we sat out in the cratch for about a hour before we decided to set off to Whilton marina. We needed to get some hull protection paint as Derwent6 will be coming out the water on Thursday. Derwent6 has been coated with Rylands Colflex VT which is a Vinyl tar paint which can be put on over anything. We will be blacking the underneath and stern, if it has been marked and around the bow, if we can get to it. More about that Thursday!!!! 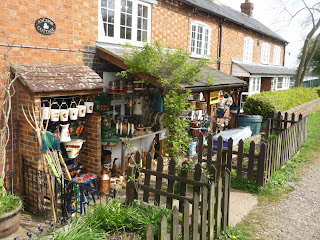 We popped into the canal shop which is someones house in the middle of the Buckby locks, it was doing a roaring trade with loads of canal memorabilla. We picked up a peg tin and some place mats. 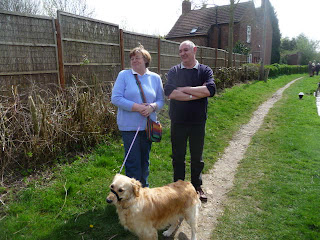 We got to the bottom lock and round the corner we heard someone shout "it's Del & Al from Derwent6" not ever having met these people before we were a bit shocked, but soon learnt that it was bloggers Roger and Pip from n.b Windsong.(http://www.nb-windsong.blogspot.com/ )Their boat is being built at the moment and should go into the water in May, they were so excited and we knew how they felt. Good luck to you both. It was nice to be recognised by someone you had never met before. We chatted for about half an hour before going into the Chandler's. 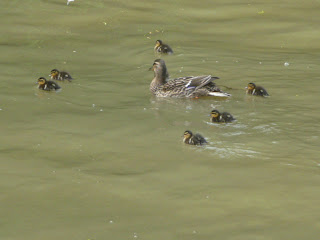 On our way back we saw our first Easter chicks, and just couldn't pass the pub without popping in for a ploughman's and a pint.
When we got back to Derwent6 we had to battle our way past the cows who we made friends with over the afternoon. This one wanted Al's cup of tea. 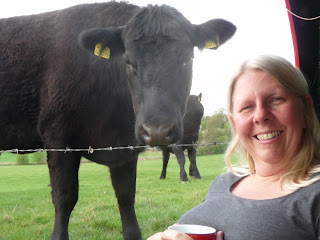 They were licking the side of the boat and we felt like turning round so they could clean the other side. 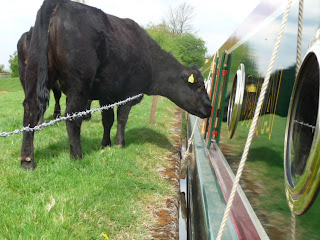 N.b Clarance pulled up along side us, they had gone out their way to meet up with us when we were at Rugby and are good friends of Fernwood. It was good to see them on their boat and we must say, it looked fantastic.
We then did some cleaning inside and touched up some paintwork and set up the aerial for the football tonight. We also put some anti slip matting down in the cupboards, so we don't lose anymore plates!!!!
Posted by Del and Al at 5:10 PM

Sorry but I will be the first, who is the old cow in the picture that looks very friendly.

haha.....I've always been a friendly old cow and it takes one to know one lol
xx

I have just looked at this blog and would like to say that I DID NOT WRITE THOSE COMMENTS there is somebody out there who thinks they are me. I am tied up again at present but I will be in touch again soon.

Hi Derwent Gnome
Looks like you've got some competition!!! (and an impersonator) but we love you all.

ps liked the trick and the cat x