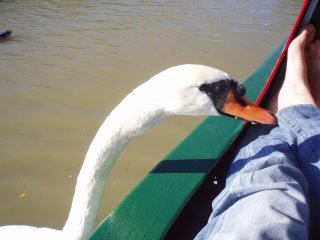 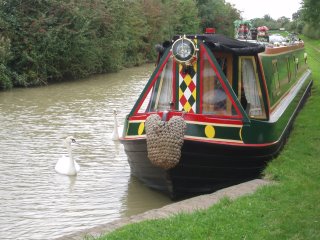 We went up and spoke to Julia and Ken at Fernwood and the people in front of us on the build list can't sell their property so have asked to swap places with us which now means Derwent6 could be finished by the end of 2007.

We were on the cut traveling down the South Oxford early in October for a week and had a great time soaking up the mild weather and being attacked by the swans.
We are lucky enough to have the use of N.B Thema which is in the family owned by Pat and Keith,which is a 62 foot Colecraft shell which Keith fitted out himself. Derwent6 will be designed with this boat very much in mind.

We have still been working hard on clearing the house out cupboard by cupboard, draw by draw,
as we have a busy month in November and December with things going on.....More next month!
Posted by Del and Al at 3:30 PM 2 comments: 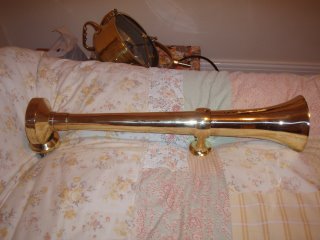 Well !!
We have now acquired a new addition as promised last month "the horn" This was made especially for Derwent6 and will go on the roof of the stern, port side. We are really really pleased with it and it was all hand made and is so loud it would blow your head off.. Bridges on the cut may need to be modifidied!!!!

We have been to our first boat jumble and spotted loads of bargains but nothing we really need at this moment in time. We are moving on with the plans and have been looking at colours and interior designs, room sizes and electrical equipment.

The inventory has been drafted for the bits and pieces in the house for the time of sale, and we now have the hugh task of deciding what stays or what goes.

We will be on the cut next month for a week and will post some pictures then.