Monty! We will be back

We were up early as we wanted to get on the services this morning, but by the time we decided to leave someone else was already on them, so we turned round at the end. You have to go under a lift bridge to wind (turn) so Al put the bridge up and then waited for Del to turn and return back. 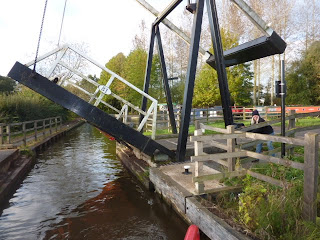 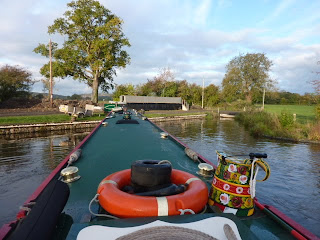 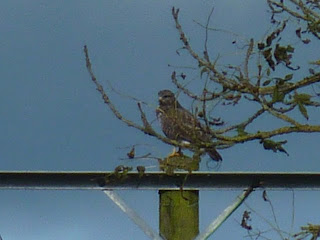 We had to get to the Frankton locks between 12 and 2.00pm as we had a booking for today. We got there at 1.30pm because of a few hold ups like you see in this photo. Everyone was having fun though. 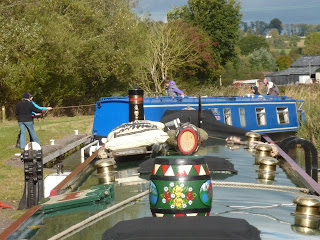 We made our way up Frankton Locks and then we said our goodbyes to the locky at the junction, and then turned downstream again to Ellesmere. 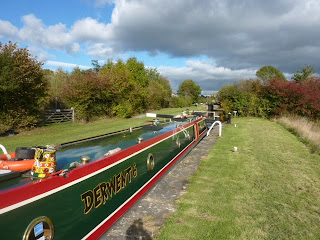 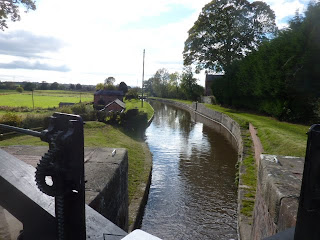 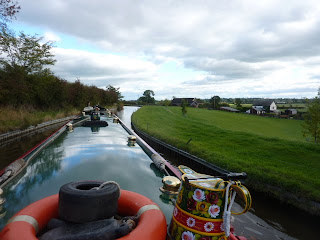 We will definitely be back on the Monty in the future. The Police helicopter training centre is around here somewhere and we were being buzzed by them every 20 minutes or so. Yep! this is what happens to Tax payers money, we did give them a wave though. 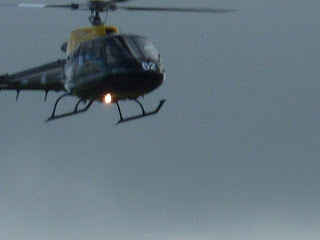 We arrived at the arm at 3.30pm and managed to slot Derwent6 into the only mooring space. We set up telly for the football and Al went into Tescos before we had dinner. After dinner, there was a 'knock knock' at the side hatch, and Elsie from nb Bendigedig was walking by. We had a nice chat before we head off in different directions for the winter.
Posted by Del and Al at 8:51 AM

The helicopters are not Police, they are from the Defence Helicopter Flying School (DHFS) at RAF Shawbury.

Oh thanks Roger!
it's just that they seemed to be the same colours as the police choppers. Something else we've learnt..