Woke up with the rain hitting the roof so will be staying put today....after a bit of an effort to get out of bed we decided to go for a walk and see what was about in this area. On walking down to Cow roast Marina who should we see but Les off n.b Valerie (http://www.boatlife.blogspot.com/ ). It was good to see him and we said we would stop by on the way back as he was having his boat safety check done. We walked up to the lock and then had a look at the pub and then walked over to the garage which had a few provisions. On the way back we went to the marina Chandlers and had a look around before seeing Les on the stern of Valerie trying to get her started. After a bit of fumbling round with a multimeter we found out he had a fault with an isolator switch which we soon put right. It started to rain again so we were offered coffee and biscuits and had a good old chat about what we had done and what we were about to do. We had to leave because we were busting for the loo otherwise we would have been there all day. Thanks for the advice and the coffee and biscuits Les, it was great to see you. 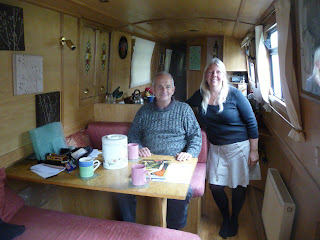 On the way back who should be mooring up but Ian & Alison off n.b Nobby it was good to see them again. He used to run a column in Canal boat magazine and now has one in Canals and Rivers . 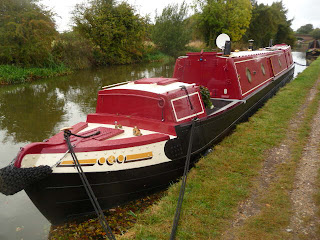 Nobby also has a new woffer, I can't remember her name, but magic liked her

Nobby also has a new woffer, I can't remember her name, but magic liked her

What`s wrong with my loo?
My guest bucket is superb.
Nice to see you both, have a great time on the southern Grand Union.

Hi Brian & Diana
You're right, a rescue dog, but don't know her name either!

Hi Les
Ah just good manners. Lovely to see you too and catch up no doubt on our way back!