We all woke up early, after a really quiet night. Where are all the other boaters...we have had nothing pass us since we moored here at 4.00pm yesterday afternoon. It was a beautiful day and we set off into the sun. (So sorry about the photo's, but we did say it's into the sun.) Once again no boats in sight and with most of the locks in our favour it was a pleasant cruise to Cowley Peachey. 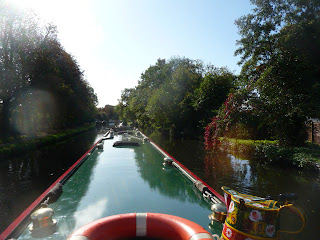 The canal is very straight for miles on end, but still very interesting with gardens backing up on it and lots of house boats to nose at again. On some parts there are lakes either side of you, but they are shielded by the trees. 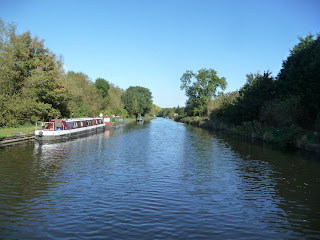 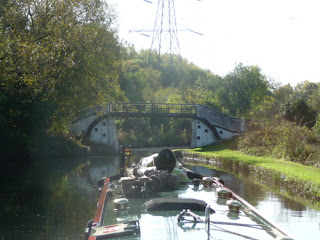 Make sure you allow enough time to get where you want to go, as you will be on tickover most of the way due to the moored boats. There were lots of signs like this one, so there must be a lot of speeders. 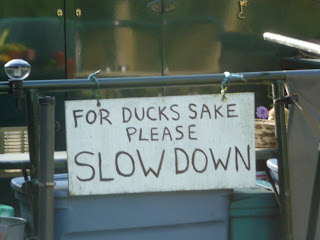 We even saw paddle power. 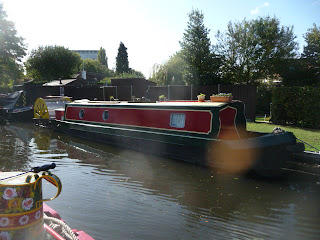 It just didn't feel like you were in London, but we were. At last we passed a boat, a working boat, it was one of the boats taking Aggregates to the 2012 Olympics. We passed the hopper which loaded the ballast into the vessel and got right out the way when it came towards us, as it took up most of the canal. We maybe seeing a lot of these.... but at least it's keeping the traffic off the roads... 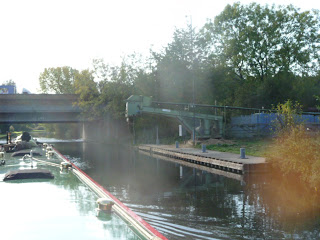 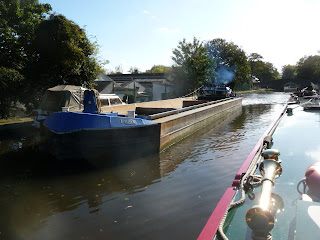 We had planed to stop at The Swan & Bottle pub, but when we got there we felt we wanted to try the Toll House Tearooms a bit further on... Good job we did; We managed to moor up right outside and while we sat in the garden in the sunshine, we filled with water. The service and food was great, and to be fair, we didn't want to move after that, but the water tank was full. This is where we then said our goodbye's to Len & Terry. Thanks for your company on board Derwent6 it was lovely to see you both.... 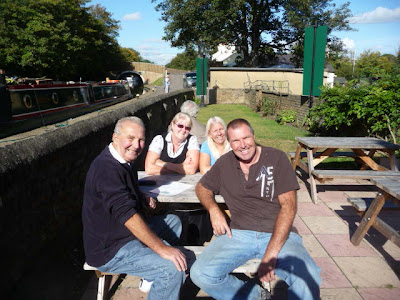 We then moved off the water point and managed to get on the seven day moorings at Cowley park. We lit the fire and settled in for the night. It's just been a glorious October day!
Posted by Del and Al at 6:28 PM

Aargh - I missed you! I think you (or your guests) may have met Richard and our two sausage-stuffing greyhounds but I was off getting the car - what a shame.

The tearooms are great - it's good food, so cheap and they allow dogs indoors......

Ah well, another time - keep that mooring warm in Paddington for us - we'll be there on Friday afternoon.....

Oh no! missed again Sue. You dogs are lovely.....so well behaved!!! Won't see you Friday as moving onto Limehouse... one day we'll catch up!