Woke up after surprisingly having a good night. We had the porthole flyscreens in and they did do the trick. We set of early because we had to be in Crick for 11.00am as Al had a doctors appointment for her ears. We took a steady trip up passing the new Yelvertoft marina which they were really getting on with. 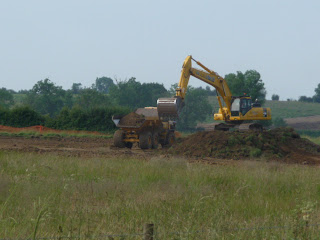 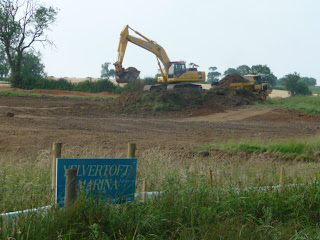 There were JCB's and large dump trucks moving all over the place, this marina is going to be massive, lets hope they fill it, lets face it, it will be good competition for Crick.
When we arrived in glorious sunshine we could easily moor right up near the bridge. The first thing we did was walk over to the garden centre and grab some charcoal for the barbee.
We then walked up to the doctors, we both had to go as Al couldn't hear a thing even to cross the road.
When we got to the medical centre we were amazed at how organised it was. In the waiting room they had a TV and kiddies play area but best of all they had a machine which you could check your blood pressure. It also gave you a printout, and it was all free...... 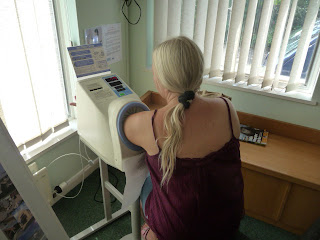 Well when we came out Al could hear a pin drop and everything seemed so loud, a relief for us both.
We then went up to the Co-Op and grabbed some BBQ stuff and some more beers as we had been going through them like wildfire.
We got back to Derwent6 and moved over to the water point and topped up while doing a quick manual pumpout. We then headed back through the very wet Crick tunnel which was quite nice in the hot weather, but didn't do the brasses any good. 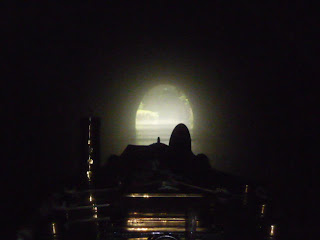 We moored in one of our 3G spots and did loads of computer work and downloads, before lighting up the barbee again.
Last week it was greenfly and this week it's housefly's, they were sticking to the boat like glue. We lit our incense candles and sticks which kept them away but still we had the odd one or two which got into the boat, so out came our trusty guitar flyswatter which came all the way from Nashville....that did the trick. 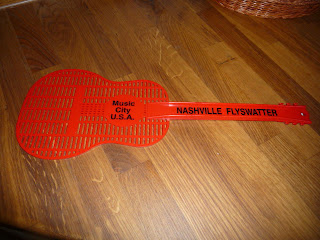 We sat on the cratch till late and thought we had better go to bed and try and get some sleep, but bloody hell it was hot at 27 degrees. Oh stop moaning about it!!!!!!
Posted by Del and Al at 9:25 PM

Earwax - uummmm.
What a relief when it's out! I find myself tip-toeing down the road, convinced I'm making a hell of a din :)