We left Kent at 9.00am and made our way back to Derwent6 in our hired Enterprise car. We made good time but the roads were very busy with the M1 being closed southbound. We unloaded the car with all our shopping and bits we bought and then sorted out Derwent6 by firing it all up. Then we took the car back and were driven back by Enterprise who took us right up to the boat. In the afternoon we were cleaning again as Derwent6 was covered in what looked like tobacco. It was so hot that we couldn't polish. The polish was going rock hard as you put it on and you couldn't get it off.
There was a couple, Alan & Carol, two boats down, who we had talked to on Friday as they were looking at Derwent6 and were selling their boat to have a new build. We were packing to go down south at the time, so said we would meet up when we got back. After our clean up we invited them up for a glass of wine and a nose. Well with some 60,s music playing and six and a half bottles of wine later we were all out of it. A great night!
This picture was taken late morning by the way!!!! 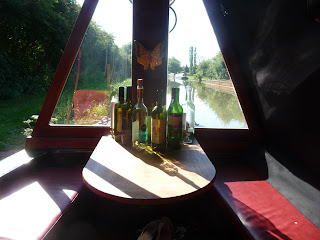 We've got some time off at the end of June, so will try to catch up with you if you're not too busy.

By the way, belated birthday wishes to your dad Al - we hope he enjoyed his birthday.

Hi both
Yep just a slight head in the morning... lol. Would be lovely to see you in June, so catch up soon. x