We were up a 4.00am this morning....can't sleep. God it was hot. We then had a heavy shower at around 6.00am and that cooled things down a bit and we slept like a log. We ended setting off at around 10.00am and got in the queue for the Watford flight, with six boats in front of us. It took us about a hour and a half to get through and we then made our way back to Norton Junction. It was so hot even the cows were looking for shade. 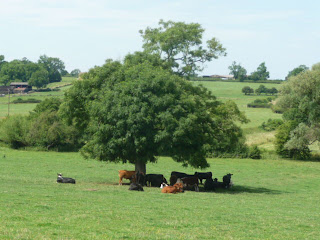 We didn't feel like eating but just kept drinking fluids. At the turn there are now new moorings with rings just after you turn towards Braunston tunnel. 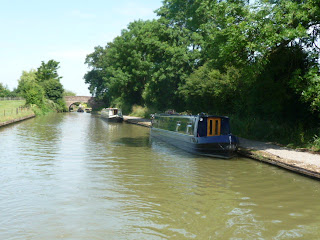 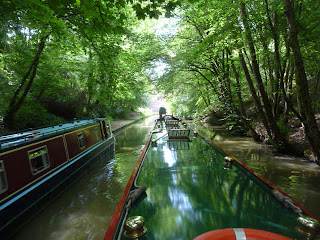 We got to the tunnel and met three boats, one that thought he needed all the room so he took a bump. He was learning the hard way. We then got to Braunston locks and met up with some hire boaters and partnered up to go down the flight. When in the lock, the guy on the tiller slipped when getting back on the boat and next thing he we sprawled out on the stern deck. After checking he was alright we got some ice and he sat in pain with his knee. This is where being a first aider came in handy and we used the R.I.C.E theory, Rest, Ice, Compression, Elevation. We then helped them though all the locks to make sure they were ok. 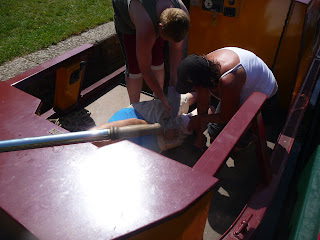 They did thank us when we left them at Braunston turn, but that could have been nasty. 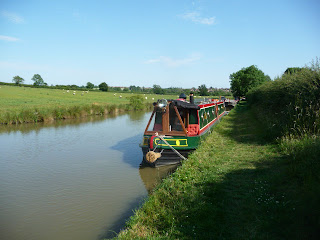 We then moored up just the other side of Braunston and got out the BBQ and watched the tennis. This has been the hottest day so far this year and may there be many more.
Posted by Del and Al at 9:17 AM