We followed a couple yesterday who were travelling so slowly they were nearly coming to a stop, and every bridge they came to they had to pole it through... So when we saw them coming round the corner this morning we quickly pulled the pins and set off. They did wave to us as we pulled away into the distance. We soon got to the Northampton arm and then onto Blisworth, The canal here is very pretty as it ducks and dives under the trees. 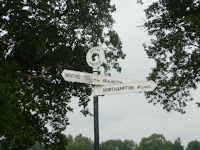 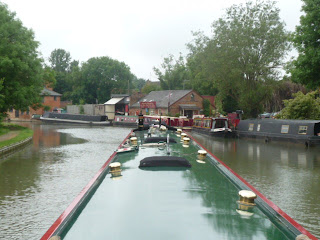 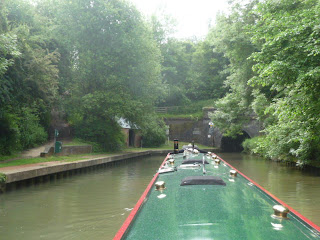 When we got to the tunnel we could see in the distance seven headlights from boats coming our way. As we passed them one by one there was a sigh of relief. Still if that didn't get you then the water did..It was cascading down the air vents like a waterfall and out of the sidewalls, at one point Al had to shut the side doors because we passed a boat at a point where the water was pouring out the sidewalls. 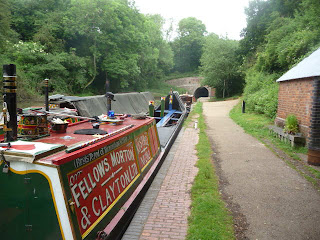 We got to Stoke Bruerne at about midday and got a mooring which appears to be just off the white markers which are reserved for boats in the show. 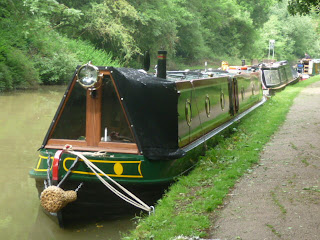 We set off to find the guy who was looking after the moorings (the harbour master) to see if we could book a slot, but couldn't find him. As we were looking around the museum area who should we see but Jo & Keith on n.b Hadar coming through the lock. 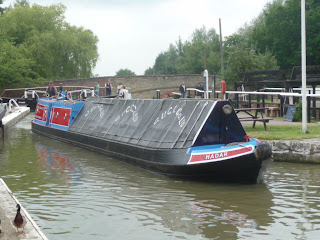 We had a coffee with them on the way back to Derwent6 and a good chat. We are all staying for the weekend so it should be fun. Then the sky's opened with thunder and lightening, so we hurried back and lit the fire. As always when we light the fire the sun came out.. so we wandered back down to find the harbour master. " yes, stick it down between the first two locks" he said. So back to Derwent6 we go and locked down with some more large clouds looming up on us. 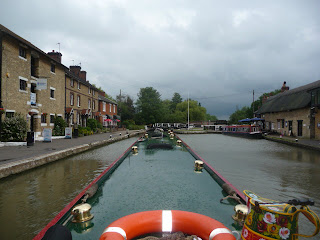 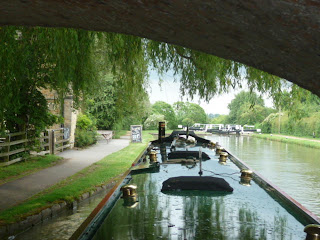 We just managed to moor when the sky's opened....... good job Al had stuck the casserole on the stove. 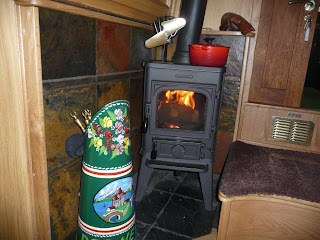 That went down well watching the rain.
In the evening we had a few beers in The Boat Inn. A good pub with a boat as a bar.
Posted by Del and Al at 1:11 PM

It was great seeing you yesterday and such a nice surprise, we look forward to seeing you over the weekend, which looks set fair thank goodness. have a great weekend. Jo

One of my favourite parts of the network Stoke Bruerne, hope you have a great stay and the weather is reasonable. On another note gonna take my GF (land lubber) on her first canal trip April next year hiring from Ashby Boats for a mon-fri (only a few locks) had planned to turn left down to Braunston then back any alternative routes that you may care to reccomend?

THAT FIRE CANT BE REAL THE ECO FAN IS NOT MOVING

Hi Jo
Good to see you too, and what a fun weekend we're having...

Hi Stuart
Totally agree, Stoke Bruern is great and it's been a terific atmosphere this weekend. Bet you're looking forward to next April, and would definitely recommend heading to Braunston as it would be a great trip as lots of variety, places to see/stop, and lovely countryside. Also, if your up/down on time, it's pretty flexible.

Hi Steve
Durrrr it's a photo not video lol