Very hot and humid this morning... we had a bit of a lay in as we sat up last night and watched The Boss at Glastenbury till 1.00am... Great!
After doing the brass liners we decided to try our hand at geocaching. Del got Al an ETrex Venture HC GPS handheld for her birthday and after a bit of a struggle to get the hang of it we set off. After loading the co-ordinates we headed in the direction of the compass arrow. 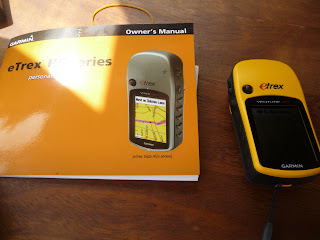 Anyone who doesn't know what we are talking about, geocaching is a sort of treasure hunt where you obtain some co-ordinates to an area where a plastic box/container has been hidden. In the box are some bits and pieces that people who have found the box have put in it. You also have to sign a piece of paper (log) with a date and your user name. It can also give you some co-ordinates to another hidden box, so it can turn into a treasure hunt. 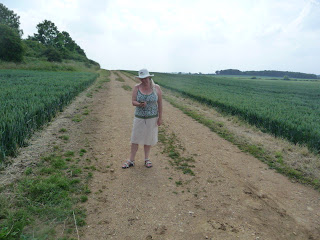 We headed off across a field close to Derwent6 and was surprised how accurate it was. It gives you the speed you are walking, how long it will take you to get to your destination, and how many miles away you are. We soon got there and when we arrived the ETrex beeped. The hunt was then on to find the box. 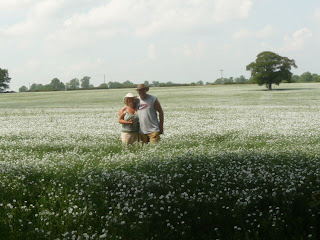 Al found it tucked right behind a fence and it was camouflaged so it was very difficult to see. 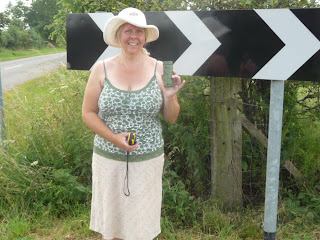 Inside there was a selection of small things and the piece of paper with a pencil. It was quite rewarding knowing you had found it, and it was keeping us both fit in the process. 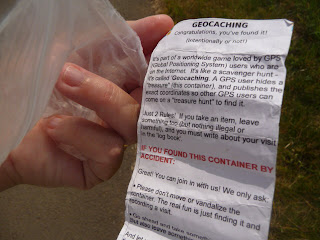 We then set the co-ordinates for the return to Derwent6 and we were sent across a bridleway across a field. It was really good fun and it got us out in this beautiful weather.
When we got back to Derwent6 we were gasping for a drink, so out came the beers. We then lit the BBQ and threw on some bangers and burgers. As we were shoving them down our throat the heavens opened, so down come the cratch covers. 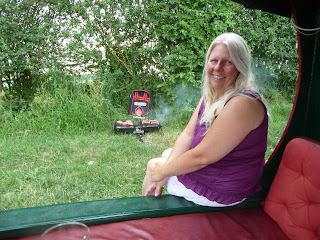 We then watched the USA nearly beat Brazil before we had a early night.
Posted by Del and Al at 7:22 PM

If you like a treasure hunt why dont you try to find me. I am sure I can give you clues and you wont find me until Im ready to let you know who I am.

Geocaching's great fun and turns a walk into something much more interesting.

Hi Malcolm
Pleased we bought this unit and really impressed with first use, even though still getting used to all the functions. Enjoyed our first cache and looking forward to the next one.....
Glad you're enjoying the blog

Hi Derwent Gnome
Now.....why would we need to find you when we gave you away??? (In a nice way of course)
xx