We got up to bright sunshine and 30 degrees this morning and we had a plan to move today. Al has got a problem with her ears and has booked into the doctors in Crick, but with the high temperatures we thought we would move later in the day, when it was a bit cooler.


We tried out the new Houdini hatch flyscreens today and they worked very well.. 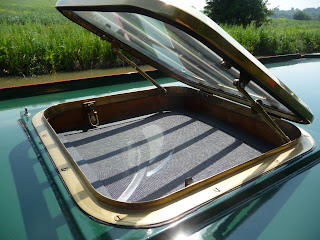 Just as we had finished lunch, n.b 4Evermoore came round the corner.(http://www.4evermoore.blogspot.com/ ) We last saw Kev & Ann at the Crick show last year and Derwent6 was still in build. We had been looking forward to meeting up on the cut one day. We got out the chairs and opened a few beers before we had to go our separate ways. Kev gave Del a rope lesson with a series of knots and doing loops......apparently he is really good at doing a cat of nine tails..... Beware! They had their grandson with them, Sam, who was really enjoying himself. 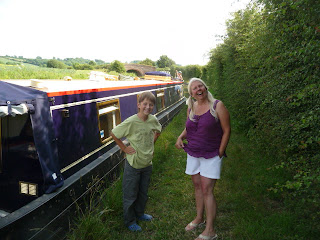 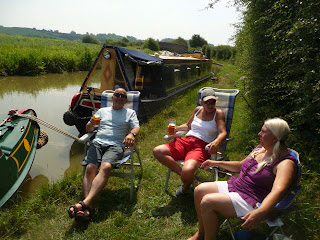 It was lovely to get together and we look forward to meeting up in the future, Thanks guys!

We then left for Crick. It was so nice doing some evening cruising, but we could smell rain and we were definitely right. We had to close all the hatches and we just got moored before it bucketed down. It was about 8.00pm, so we settled down and watched the tennis. It looks like it will be a early start in the morning.... 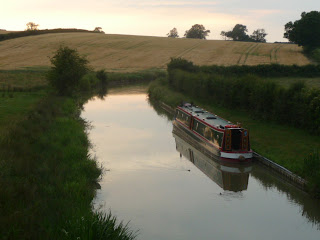 well how did Al get on

I know it's been a long time but me and computers nearly mix. Just a quick word from Me and Shazzy (little fat balding bloke and the missus you let look round your boat) Thanks for all your help at Crick with boat builder hunting, we're nearly there for the builder, one of three now but getting closer. Money, well that's another story, nonetheless, not put off and the dream lives. Thanks again and no doubt we will see you again on the cut, this time, us in OUR boat. John and Shazzy Robinson

Hi John & Shazzy
Lovely to hear from you. Keep that dream alive, you WILL get there!
Keep in touch and see you on the cut.