Al went and got some croissants and a paper and we had breakfast out in the cratch. It was another hot day. We then set off for the West End and went to the Sports Cafe in Haymarket. 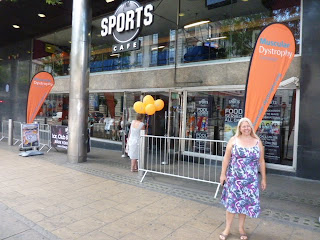 We wanted to see the British Grand Prix on the big screens they have, and we weren't disappointed. Afterwards we walked to Piccadilly and along to Hyde Park Corner where we went to our favorite restaurant The Hard Rock Cafe. 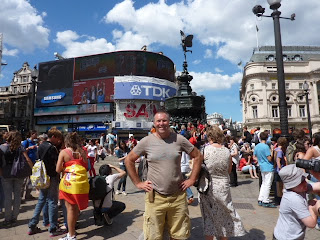 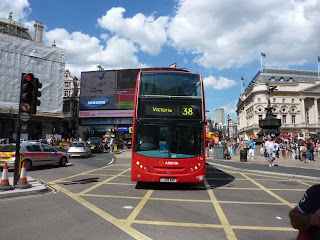 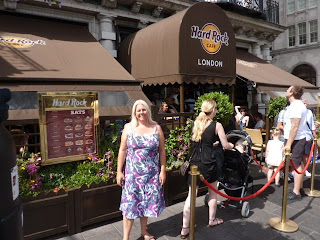 We know all the tricks here on how to beat the queues and were taken downstairs where they have air conditioning (not a lot of people know that). 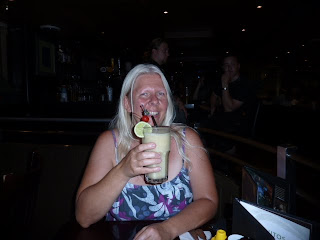 Al also had her favorite cocktail!
Afterwards we walked along Park Lane and back along the Edgeware Road to Derwent6. We just had enough time to quickly get ready and get to the pub for the football. A lot of the Spanish had gone to Piccadilly to watch the game, so the pub was a bit quieter than when we watched the Germany game but it was still a good atmosphere. We got back to Derwent6 at around 10.30pm and went straight to bed!
Posted by Del and Al at 8:40 AM

If Al had that other wing, maybe she could fly!
Glad you are having a good time in London.

So pleased you are having a good time in London,the pictures are great,you both look so well.We're looking forward to seeing you in August.Lots of love.Mum & Keith(Thema)

I'm planing to make a trip to London. I thought it will be the best to go in the summer but after making a research I came to the conclusion that the prices are pretty hight in this season. Now I'm searching for London hotels. May be it will better to stay with our friends in London.