A fruit based drink for the lady

With the rain all night long and it being very windy, we were quite relieved to hear the lock keeper tell us we will be going on the Thames tomorrow. We were pleased as we wanted to have a look around here at Brentford. We then got a text from our friends Maxine and Graham who were coming up to see us and had manged to get some tickets to see Al Murray (the pub landlord) in Chiswick. We just had enough time to have a look around town before we got a wave from them in the car in the high street. They had their sons Saul and Troy with them and we all couldn't fit in the car, so we walked to Brentford station to meet them at the venue in Chiswick. 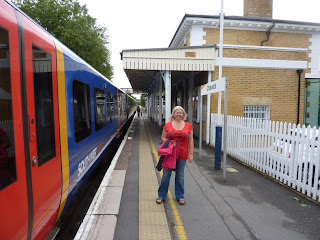 It was only a couple of stops on the train. We then had to walk a couple of miles and we met up again in a pub on the high street where we had a few "Fruit based drinks for the ladies". We had some lunch and then at 4.30pm, and half cut, we went into a comedy house where Al Murray was doing a rehearsal for a TV programme for ITV. 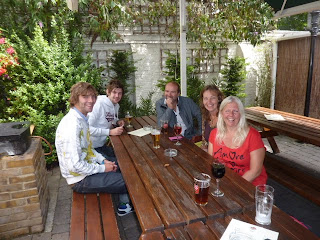 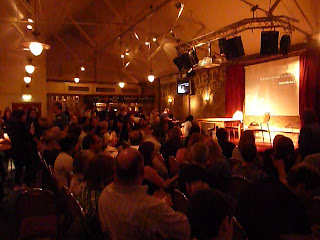 Afterwards we got to sit and have a chat with him but he didn't seem to think it had gone that well. He had lost a lot of weight though. 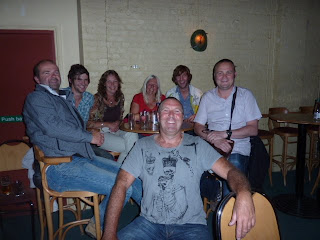 We then went back to Derwent6 for a coffee and sat watching the planes landing. We all got hungry again and walked up to an Italian overlooking the basin. They all left around 11.00pm, a lovely day, thanks guys for everything! So it was fate that that lock keeper in the morning said we couldn't get on the Thames till tomorrow. Lets hope the weather is better!!!!
Posted by Del and Al at 7:36 AM