Fun at the locks

We decided to move later today after we had tidied up a bit and Del had waxed the side. We ended up setting off around 10.30am and could see the clouds ahead looming up on us. 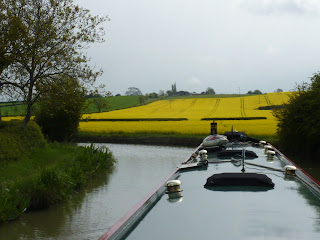 We thought we would get to Braunston.....Wrong! it poured down just as we were nearly there. We passed n.b Piston Broke (see link) and they could see we had got our plan wrong. We moored up as soon as we got to Braunston, soaking wet, so we lit the fire to warm up. You know what happened next, the sun came out and it wasn't long before we were roasting on Derwent6.
After some lunch we set off again and turned into the marina for a pumpout. 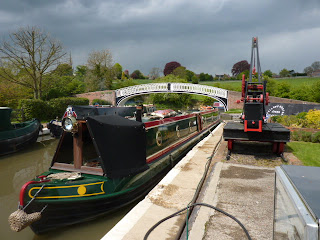 It's ten pounds here and a good suction pump so we always stop here if we are going through. We then set off through the locks and as we approached the locks the gates closed with one boat in it. Al was on the case like a shot and when Del arrived in the lock they said they would be waiting for us in the next lock....Bad move! It turned out to be a boat with five couples from Sweden, who were having a great time, but never seemed to have a clue what they were doing. Here you can see Al doing all the work while five of the crew watched her. 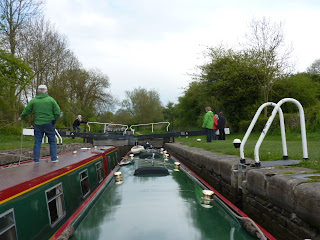 You should have seen the fiasco with them all trying to get on at the top lock, and we ended up closing both gates for them. 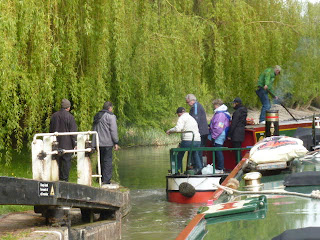 They then struggled to get by the work going on in front of the tunnel entrance. Yep! they are still working on it. 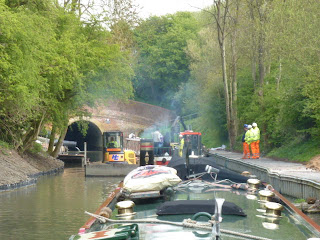 We kept well back in the tunnel, as all you heard was the banging of their boat off the side walls. We passed them as they moored up at the other side of the tunnel, and we all had a laugh. When turning at Norton we found a spot just the size of Derwent6 to moor into, and it was dinner and football in the evening.
Posted by Del and Al at 6:09 PM

We are currently at Kilby Bridge awaiting to race through Leicester.