Blimey! what a wet and very windy night. We could feel Derwent6 rocking side to side and the rain was trying to blow in everywhere, but we got through. We were surprised when we got up that everything was still in tack and we hadn't lost anything.
Today we set off as we needed water, and had difficulty getting off our mooring due to the strong winds. We were pushing the bow of the boat out and it was blowing us straight back in, we were beginning to think we should of had a bow thruster, but no, we got off in the end by reversing back until we could swing the stern round, all good fun. We got to the bottom lock and filled with water. It was packed with people and we were dreading going up the locks with the 1000 and 1 questions. we were also beginning to wish we hadn't had that big water tank fitted, it took over a hour to fill, but it had lasted over a week and we had done two washes with it. 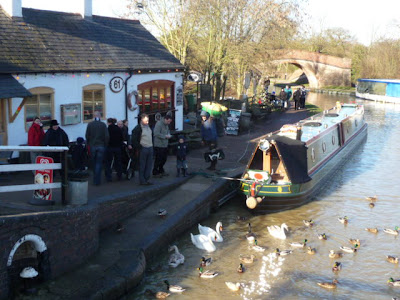 It was a fantastic day today with the sun shining and we felt great looking down on the crowds taking photos of Derwent6, we still can't believe it's ours. If you look closely at the photo above you see the guy who also had his home with him, (and there's me moaning about back ache) believe it or not, your see he was actually holding a suitcase as well. 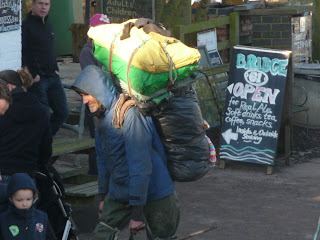 We then proceeded through the locks (and the 1000 questions) and got stuck at lock six, as the lock pound was empty and we couldn't get over the cill. There was a big bang as we hit it, but everything appeared to be aright. We opened the paddle on the lock above, but it was still slow filling. In the end Locky (the lock keeper) came to the rescue, and filled all the other locks for us. Apparently there has been a problem with one of the pounds, which has been leaking and draining off somewhere every half hour. Lets hope they get it sorted by the summer or there will be problems. We then got to one of our favourite moorings at the top of the locks and chilled for the rest of the day with a super roast beef dinner and wondering if we'll get the snow they forecast..... 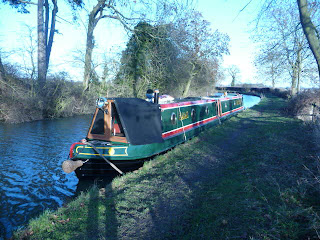 I recognise that mooring! Hi Folks. Weekends are not the best time to get through Foxton, the world and his brother come out don't they?

I am abit confused - are you just going up and down those locks every day or have you gone anywhere else?

Hi Lesley, I know, not good timming but we needed water! and then thought oh well.....might as well go up the locks.
Its great to get moving after the ice.....

OK, so it is the 'new to your blog' person again! Nice to see that LesleyNB Caxton knows where you are, but I would love to know? please