We were up early as we had made a booking to be on the tidal Trent at Cromwell Lock at 11.00am. This was not high tide, but it would give us enough water to get to Torksey junction.
We had about a hour and a half to get there from Newark, with another lock in between, so we thought it better we get there.
We left at 9.00am and another boat left in front of us, so it looked like there was two of us.
We got to Newark Nether lock and had to wait till the lights went green as this is a blind lock. 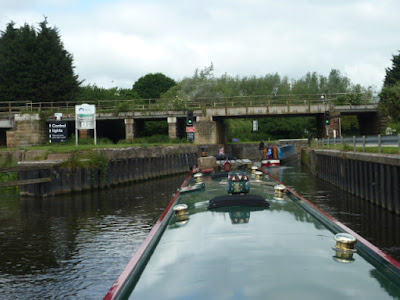 We heard on the radio the message sent to Cromwell that the two boats were on their way.. You have to tune into channel 74 and this gives you all the traffic on the river..
It was a nice day but the wind had got up, so when we got back on the main river it was quite cold, wouldn't want to do this in winter..
Although the river was flowing with us the wind was right in our faces and making waves on the long straight sections.. We arrived at Cromwell with the gates open waiting for us.. 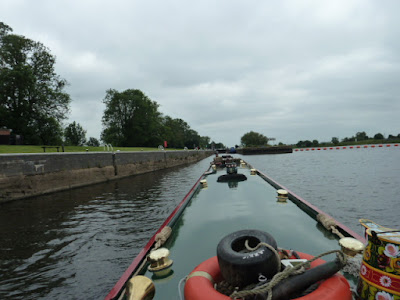 We were all prepped, with anchor at the ready, life jackets and charts, and of course the Nickolson guide, as the gates opened.. 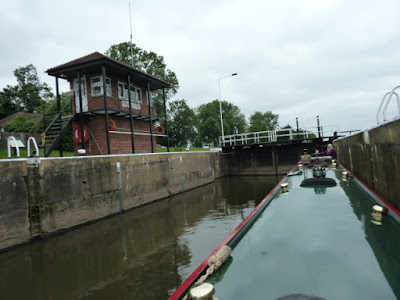 As you exited you see the foam from the huge weir here, thousands of tons of water was pouring down which meant we had plenty of the stuff. 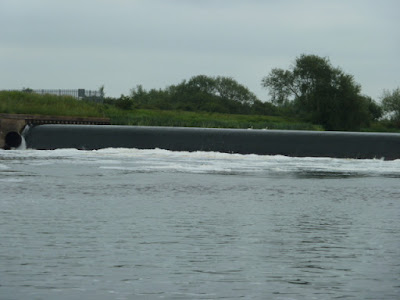 You then notice the mud banks which tells you we are filling up very slowly and a good study of the charts is required.. You need those bloody charts!
The first section is twisty and full of turns, so you have to use a bit of common sense and stay away from the inside edge (don't cut the corners). In fact in places you have to hug the outside edge. 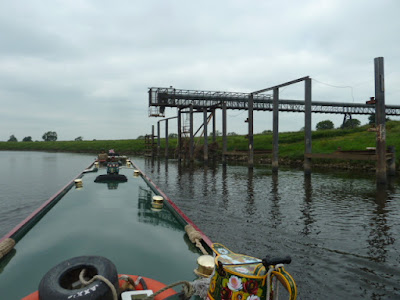 The next hazard was the sunken Island at Normanton Island. 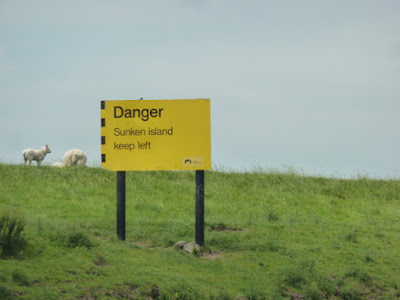 It gives out warnings but the chart gives you guides on the bank to aim for and then tells you how close to the bank you need to be to avoid this huge shallow spot.. You can see the cruiser which overtook us earlier and how close to the edge you have to be. 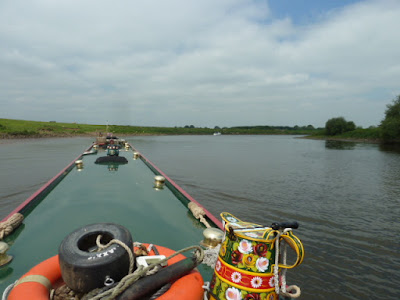 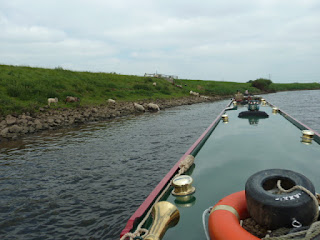 To be honest there isn't much to see view wise, but all the concentration went on pointing the bow in the right direction in the winds.. 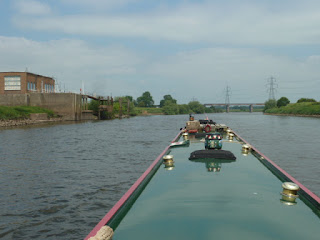 The charts also tell you which bridge hole to go through as it can be confusing and in one case disastrous as it goes into a sunken island. 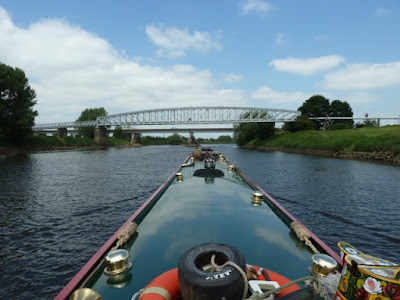 We did find it a bit disconcerting that they use the graffiti on the bridges to guide you through. Fledborough Bank is another large bank erosion and you use a white post to guide you past the large shoal. 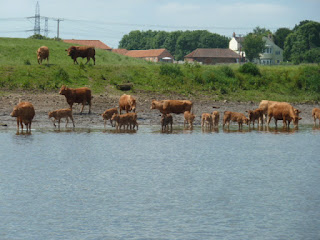 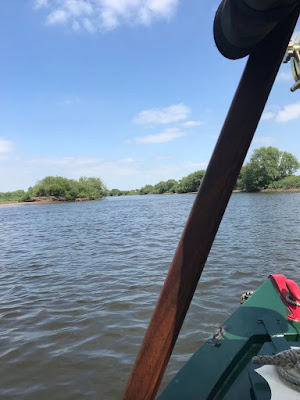 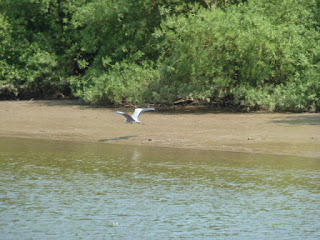 You can then see the huge power station in the distance as you pass under the powerlines coming from it. 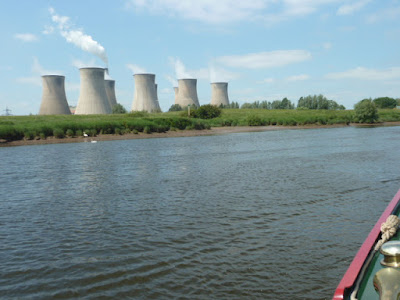 You take the last two turns after passing the smoking chimney tops, and see the entrance to the Fossedyke in front of you with a huge sign giving you directions.. 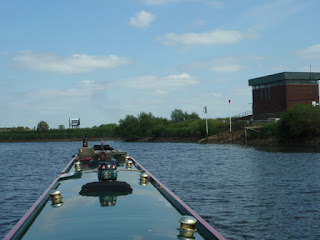 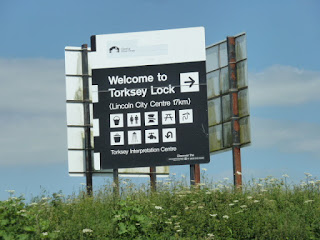 There was just one space for us to moor on in front of a wide beam, which after we had tied the ropes was given the instruction to go. 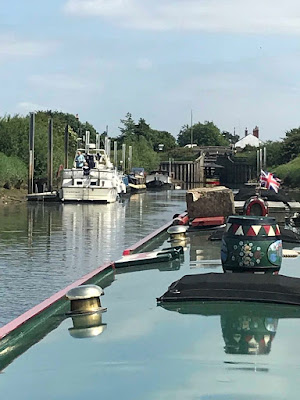 After seeing the locky we were told that we had to wait an hour for the water levels to rise. Time to put the kettle on. 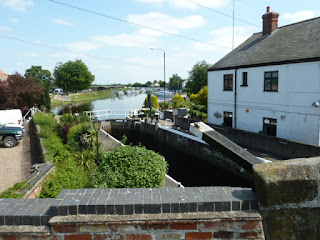 The lock gates opened bang on that hour, (these lockkeepers know what they're doing), and we went in with two other boats. 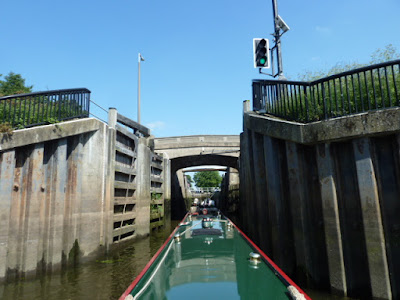 When we came out we went straight onto the pumpout station as we had a card to use.
The lockkeeper then told us where the visitors moorings were and that they were empty, he even apologised for it being a bit over grown, Tooty the cat won't mind that for mice hunting! It was a nice quiet mooring with a low enough wall that we could get the side doors open. 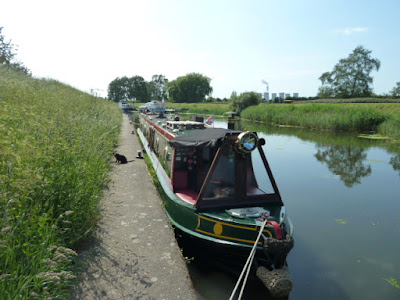 We showered and then walked up to The White Swan pub, which is a good old fashioned pub and the food was to die for.. 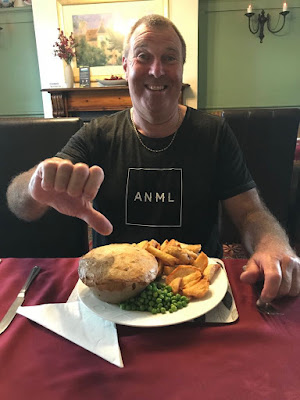 Del had the recommended Steak Pie and lets just say you didn't want a desert when you had finished it.. We walked back to Derwent6 to watch the football with a lovely sunset, come on England... 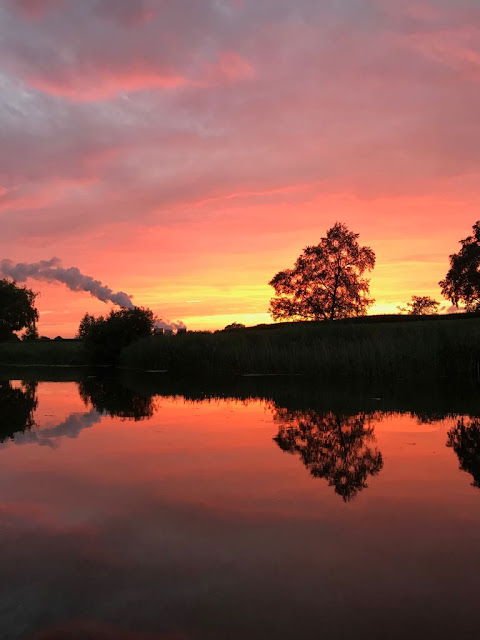 Wow, well done very much enjoyed your cruise up to Torksey with you.
Fabulous pics and sunset thanx for posting as we hadn't done this trip.
Looking forward to seeing the next bit now.
Ann and Keith xx

It’s a great trip, isn’t it. When we did it, a boater who claimed he’d been on the river 35 years was leading the way and managed to run aground. He was there all night. I was glad I followed the chart rather than him.

Thanks Ann & Keith, we're loving it so far, and having glorious weather is an added bonus! x

Hi Anna, I know, it was 'desperate Dan' portions!! Sending lots of love back to you x

Hi Adam, yes we're loving it! Mind you I wouldn't have been happy being grounded all night!!! I was glad too that we had the charts! x