Woke up to more sunshine this morning and opened the stern doors... big mistake, because as we opened them the top hinge broke. 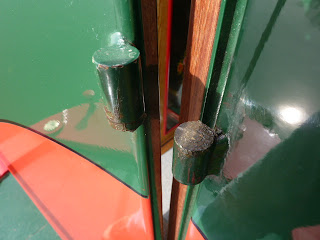 So we gave Jim Sparks from Alexander Boats a ring (our hull builder) and he gave some advice on what to do and said he would be over tomorrow with a new hinge pin.

Well Del drilled out the old one and with an old modelling knife and a tap washer managed to make one. 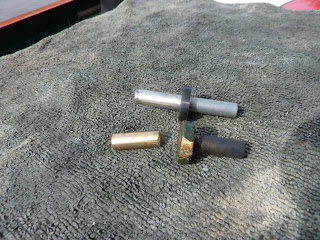 Jim then rung to see how we were getting on and said he may be able to pop over this afternoon....Great stuff! 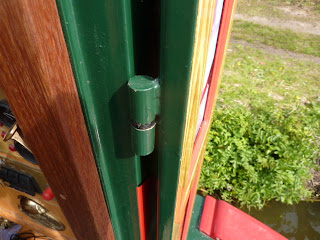 After lunch we pulled the pins and moved on to a little village called Handsacre so Jim could get to us. 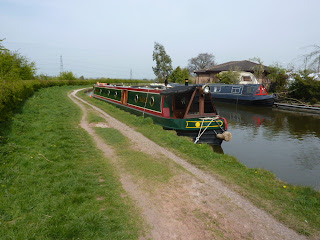 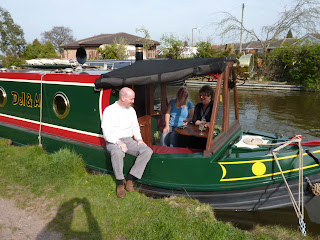 Jim & Ann arrived with a new pin and some spares at about 4.00pm and after a few minutes the new one was fitted. With close inspection you could see the old one had seized with paint and we must make it quiet clear it was nothing to do with the hinge and pin arrangement fitted by Alexander Boats. Afterwards we sat with wine and flapjacks in the cratch, and walked down to The Crown Pub for a pint before they headed back. 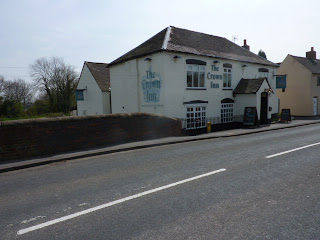 It's great to know you've got the aftersales service with Jim, and thanks Jim for everything you've done.

After they had gone we watched the second half of the Arsenal, Man City game in the pub and then went next door to the Fish and Chip shop where we had them open and sat on the bridge...Lovely!
We walked back to Derwent6 and watched telly late into the evening...
Posted by Del and Al at 11:55 AM

Bet youve enjoyed the weather this weekend!!! Guess who called round tonight - Penny!!!! What a gas! House move still on track for end of June hopefully but nothing exchanged yet. When are you down in Kent next? Would be great to see you. lots of love Zxx