It was a very cloudy day and funny that it was very quiet... reason being, there were no aircraft in the sky's due to this volcanic ash coming from Iceland.

So it was a good day for changing that fuel filter, so the covers were off. 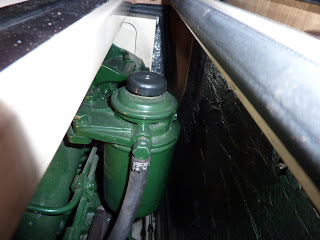 After removing it the new one didn't go on as far as the old one and it just seemed forever to prime. In fact it nearly took about half a hour, so we hope the priming pump is working OK. But after fitting it Derwent6 fired up like a dream. 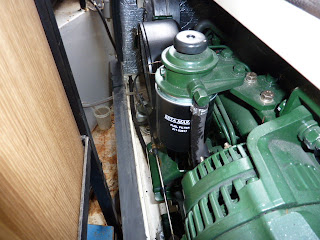 Some other jobs were done like cleaning the bilge out and greasing the stern gland bearing. Also Del torqued the engine mounts and fixtures.
In the afternoon we went for a walk and ended up at Cineworld where we went and saw the film Cemetery Junction. We were the only ones in there and it seemed funny having the place to ourselves and we've got to say we thoroughly enjoyed it. 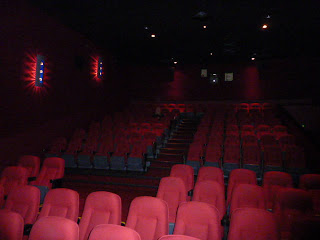 When we came out we went to Franky & Benny's where they had a lunch time menu of two courses for seven pounds. It finished at five o clock and we got in there at three minutes to. Touch!
We then walked it all off getting back to Derwent6, and it turned out to be a nice evening. We got back just in time to see the big debate on the telly....Hmmmm
Posted by Del and Al at 8:38 AM

Hi Bob & Barbara, that explains things as we wern't too sure who you were :-)
We'll look out for you on the cut.

Hi this might sound daft and forgive me if I am wrong! but did you check that the seal came off with the old fuel filter. When I changed mine once I only noticed at the last minute that the old seal was still attched to the underside of the pump. May explain why it didn't go as far on and took so long to prime.