The day started with a lost cat, he had been out all night and not come back for food, which he normally does.. It was 8.00am and the towpath was teaming with dog walkers and he would be taking a chance to get back on Derwent6. So at 10.00am it was the search party and after five minutes of calling a little whimper was heard in the undergrowth. He had got frightened with the dogs and was hiding in the weeds and stingers. Al couldn't entice him out so Del grabbed him and his sticking in claws and carried him back to the boat.. Once on board he was purring and rolling as if nothing had happened, little sod! 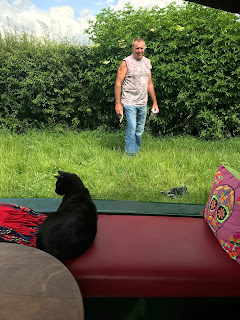 It was a boat cleaning day for us and come midday it was so hot we just had to veg out in the cratch, In fact it was so hot for Tooty he went back out again and into the undergrowth where it was cool, and he was still there even when we went out..

In the evening the Shroppie Fly pub had a band on called ReMind who were a Simple Minds tribute band, even with one band member missing they were really good, and with a warm summers evening and a beer in hand, what can go wrong. 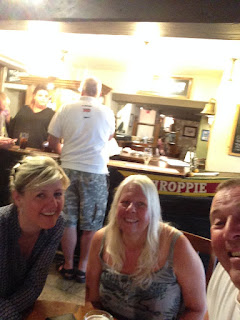 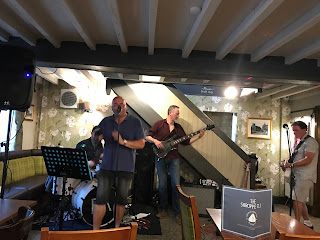 We got back to Derwent6 at 12.30pm and a quick call for Tooty, and this time he came scampering in, pleased as punch. We think he may have learnt that dogs are about early morning....
Posted by Del and Al at 3:37 PM