Crash at Pyrford (and a free meal)

We had a bit of a lay in this morning and had breakfast out in the cratch. We set off at around 10.00pm and headed for the small gap in the hedgerows with a small sign saying the Wey Navigation. 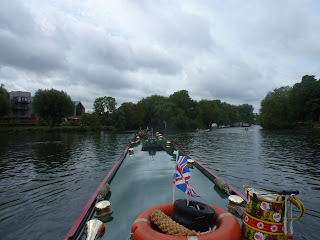 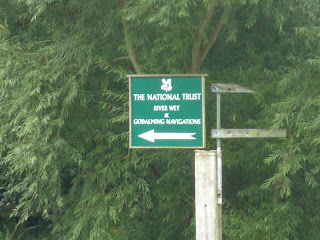 It was a short trip before we met the first lock and the National Trust Lockeeper. 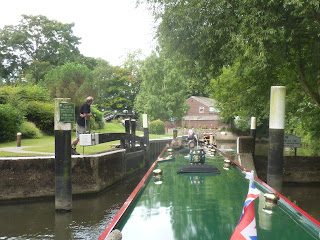 We met another boat and went into the lock together. At he top we had to wait in the lock while we paid our fee of £102.00 for our three week stay. Then we were on our way, and how beautiful it was. It was nice to get off the Thames for a bit and feel the tranquility of the countryside again. The next lock we came to was Towns lock and we never read the instructions on where the lock landings were so we stuck the bow into the bridge before we found Al couldn't get off. 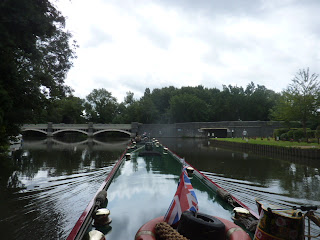 We manoeuvred out and we sorted it out in the end. Hmmmm best read the book then!
We then got to Coxes Lock where a beautiful mill had been converted into homes, it was a wonderful setting. 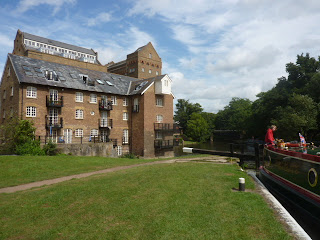 It was slow going up steam but slow is what we do, so it was nice to take everything in and see it in all it's glory. After getting through the tricky lock of New Haw with it's strong gate paddles and short beam gates we passed the Basingstoke canal which won't take our draft. 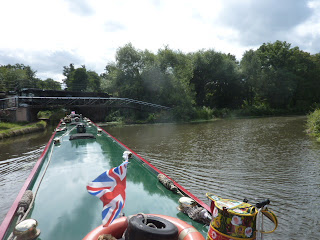 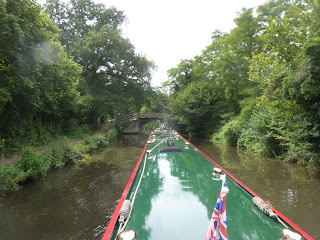 We then got to Pyrford lock and were surprised at the moorings outside The Anchor pub, we backed off just before the winding hole and moored with a view of the pub. 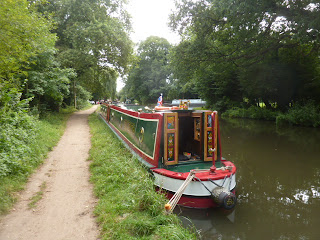 We then walked up to the pub for lunch, and a very fine lunch it was at a very good price, we all had steak as Thomas was paying for a thank you for letting him stay with us! 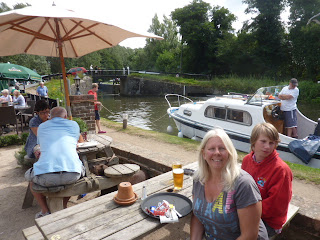 While we were on dessert a car was crossing the bridge and smashed into the metal posts on one side. It was a lady on her own and she couldn't turn the wheel afterwards. Three guys tried to help her but couldn't move the crumpled wing. Del came to the rescue with a long bar and the axe to get it out with ease. With a thank you and glum face she drove off.
With very full tummies we chilled in the afternoon and played board games in the evening with Thomas.
Posted by Del and Al at 8:36 AM