We had a heavy frost last night and it looked very pretty on the cut. Lucky enough it wasn't cold enough to freeze the water. 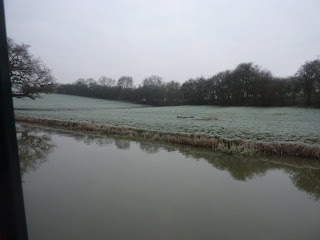 After doing a few jobs in the engine room like tightening the stern gland and cleaning out the bilge, we set off to get rid of our rubbish and see how n.b Piston Broke had got on. When we arrived they had the engine running but Paul still had some minor leaks which were soon put right. 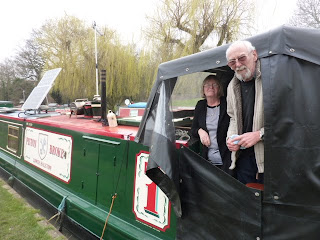 Everything seemed to be working fine, but the final test will be when they decide to do some hard cruising. Paul and Del talked engines while the girls, Lynne and Al, talked living on a boat for a hour or so.

We left just as it was starting to drizzle as we had a gammon cooking on the stove. When we opened the doors to Derwent6 the smell was to die for, yummmmy!!! But while we were away Derwent6 seems to have got a bit of a bashing as we found a golf ball on the roof...Fourrrrr! 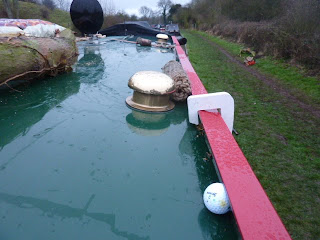 Good job we weren't here really, there might have been a bent golf club....
Inspection for damage will have to be in the morning.
We then chopped up some more wood to last us over the weekend, but we seem to have a problem now with the chainsaw as it keeps stalling. Oh well, another job!
Posted by Del and Al at 5:07 PM

Just another broken club to add too the rest then, how many is it now then ???