We were up early as we wanted to turn Derwent6 around and get on the same spot where we are, here at the end of the Welford Arm.

We wanted to start work on the starboard gunwales but just as we were about to start it started to rain. We managed to do some degreasing but that was about it. We could see the sun trying to come out but we had an appointment for lunch, so after a quick shower, and bottle in hand, we walked into Welford.

There we met Pat (Del's mum) and Keith who were on n.b. Thema in the marina. We were invited for Sunday lunch, an opportunity not to be missed. It was lovely to meet up again after being stuck the wrong side of Atherstone locks for the winter, and we had loads to talk about. 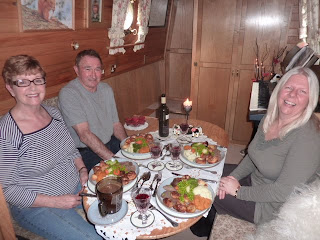 We left at 5.15pm with clear blue skies, and got back to Derwent6 just in time to run the engine for a hour before it got dark. We watched Dancing on Ice on telly with ice forming on the windows outside. We were warm and toasty though.........
Posted by Del and Al at 9:40 AM

Del we never knew your mum as Pat, we always called her Bubbs, wonder where that came from, give her regards from Les and Barb next time you see her. We had a good few laughs at Moultain hill back then in the long ago past.
Love to u both
Barb & Les

Hi Barb & Les
Al calls Pat 'bubs' its a nickname from her childhood. Will pass on your best wishes...hope you're both well, great to hear from you. Take care both x