We were up at 6.30am this morning as Al was meeting a friend down in London for a girlie day. Del helped her, when off the towpath, to get out of her wellies and into her boots, and then she walked to the station. Del came back and finished off the greasing of the side doors, as we were on the other side of the canal now. Del then walked up to Lynne and Paul on n.b Piston Broke and their new pump had been fitted but they still had a problem. So Del and Paul took matters into their own hands and after a joint decision they decided to bypass the fuel filter. 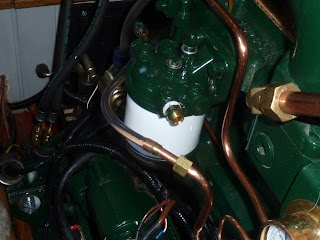 It soon became clear that the fault had gone and there was no air in the system, so the filter housing must have a fault. On close inspection a crack was found and a new one ordered with Beta engines.
Al was having a great day with her friend Joyce. They went to Oxford street for some retail therapy and had a good lunch in Prezzo's. Thanks for a lovely day Joy! Al got back to Del at around 6.30pm, and Del managed to polish the starboard side of Derwent6 while waiting Al's return. 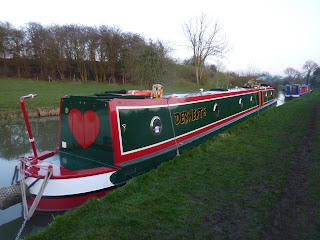 In the evening we just relaxed with some music.
Posted by Del and Al at 9:58 AM