First Coat and a New Propeller

We were up at 6.30am and Del was out prepping up the other side of Derwent6. It took up most of the morning and then the shell was ready for the black stuff. Derwent6 has been blacked in Colvex VT which is a Vinyl Tar which gives off strong fumes. We were given masks to wear by the Wharf guys and boy did we need them. We started at the bow and made our way to the stern. Al worked her way down with the roller and Del followed with the brush. This worked quite well and we were all done by 5.00pm. We only stopped for lunch and when Alan and Dave turned up from Axiom Propellers.
What was wrong with the propeller you might ask? Well absolutely nothing, but Alan and Dave wanted to see what the prop looked like after two years on the cut, as we were one of the first continuous cruisers to have one fitted. We had hit a few shopping trolleys and had rather large lumps of rope wrapped round it, both of which stopped the Beta 50. It had been cutting up ice and the odd lump of wood, but to all of our amazement it was still in pretty good shape. 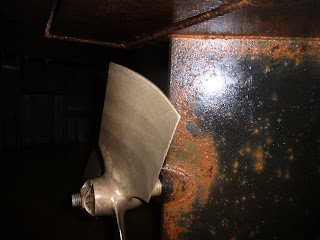 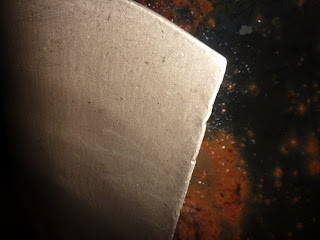 Alan and Dave had turned up with another prop as they wanted to take our one away to run tests on it's performance on the test bed, and also show potential customers what it looked like after two years cruising. Anyone interested will be able to see our propeller at the Crick Boat Show on the Axiom stand. 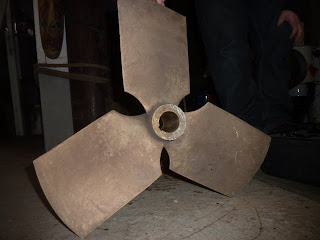 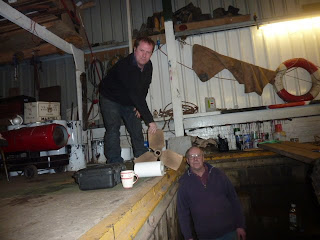 Anyway it meant we were having a new prop. So we now have dropped a size from a 19" diameter to a 18", but we now have the Mk2 version which has a bit more power... we are very excited about how it will perform. Watch this space!!!! 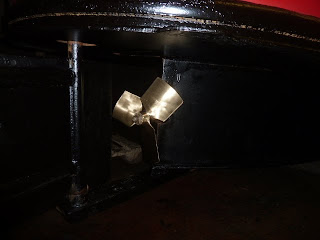 As the blacking was drying tonight we were not able to shower on Derwent6 as the water will run down the sides and ruin all the good work done. We have got extension pipes in all the holes in the hull but they still tend to leak so we won't be taking any chances. We are lucky enough here to have the luxury of using Pat (Del's mum) and Keith's house for a shower. In fact we really took advantage and had a long hot soak in the bath, something we hadn't done for a long time....

We then went back to Derwent6 relaxed and knackered!
Posted by Del and Al at 4:04 PM

Hi Both,
Your old prop looked amazing for two years on the cut and I bet Dewent6 looks a real treat with the new blacking.

I think we will have to seriously concider an axiom for Amyjo when the time comes.

Hi Steve & Chris, Thanks, yeah we were amazed at how well it had stood the 2 years, and we have clouted so stuff with it! Hope the plans are coming on well x

Hi Jo, yes it was lovely catching up, we always have a good laugh. Lets hope it's not too long before we get together again x