Egg on their faces

With Al still down in Kent Del didn't have a good night. At 12.30am there was some noise outside Derwent6 and when Del looked out the porthole two lads were walking up and down the boats and a car was parked in the car park with rubbish all around it. Del then jumped out the boat in his underpants and watched the two lads tinkering with the end boat, but they couldn't untie it. It then looked like they were throwing stones at the windows of the houses opposite us, and were spooked by the end boats light coming on. Del went in to get some clothes on and the camera, but they were spooked again by the noise of the door opening on the end boat and Del getting back out of Derwent6. Oi ! he shouted and they run like rabbits back to the car (a red 52 plated Renault Clio by the way)

In the morning Del walked across the car park and picked up all the rubbish and noticed a big box of eighteen eggs which is what must have been thrown at the houses. 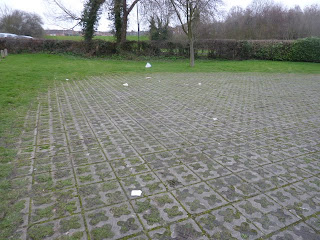 On checking the end boat that was also covered in egg. 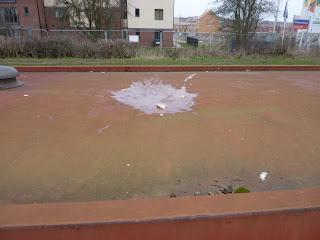 They were so scared, I bet they don't come back tonight!! If they do we will be waiting!
Al got back home at around 12.30pm and we had a quick unpack before we headed off down to Pizza hut for an as much as you can eat buffet. 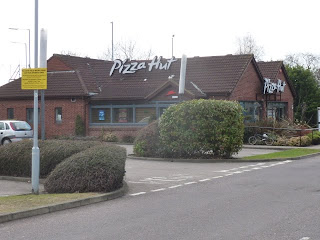 We then walked over to Tesco's and gathered a few bits before getting back to Derwent6. We managed to get a tv signal for the narrowboat program "The boat that Guy built", on tonight.
Posted by Del and Al at 7:36 AM