The weather looked good in the morning with rain in the afternoon, so we set off at around 8.30am and made our way into Braunston. 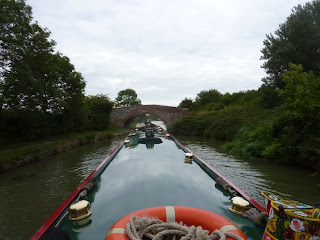 It was still busy with boats at one of the main hubs of the system. 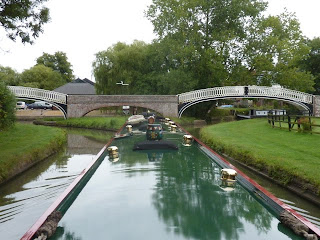 We managed to get on the water point and had to wait while the two boats in front of us filled first. While that was going on Del went to the chandlers and picked up some oil and filters. When we were full of water we went into the marina and had a ten pound pumpout.
We then managed to get on our way again and joined the queue to get through the locks. There were four boats in front of us here and as these are double locks it wasn't long before we were moving again. We still had to dodge the orange bollards, even though all this work had been done at the tunnel entrance!!! 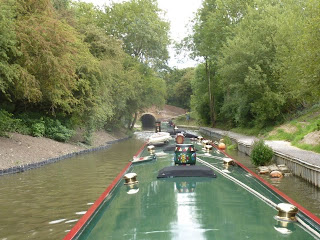 We then had the tunnel to deal with and met five boats on the way through, one of them right on the kink, but no damage was done.....Phew!
Just as we came out the other side the heavens opened, all these hold ups meant we were running a bit late. So we pulled over and shut ourselves away listening to the rain on the roof.
Posted by Del and Al at 7:04 PM

It was great to meet you during Cropredy weekend. We were one of the boats queueing at the first lock towards Banbury on Sunday. I pulled over and gave up after that though. Monday was a much better cruising day.

Probably see you there next year if we don't cross paths sooner. Take care.

A ten pound pump out, well with what you eat it dont suprise me. Also when you are down next I have a camera case for you.

All the best from sunny florida