Two Weddings and a holiday

Well we have been very busy over the last couple of weeks as we took some time out to go to a couple of weddings, and to be honest it has been nice having a break from doing the blog.
We will give you all a quick recap (without being too boring) on what we have done, as this is really a boating blog and we want to keep it that way.
We left Derwent6 with some friends who were looking after her while we were away and got the train down to Al's Mum and Dad's. We then met up with friends Bernie and Sarah for a couple of nights. We must mention at this point that we are so proud of their daughter Hannah for coming top of her school by getting ten A* and passing all her fifteen subjects at GCSE. She even made the front page of the Kent Messenger paper!
We then picked up Pam and Alf and made our way down to Somerset (Oooo Ahhhh) where a cottage had been booked for the week. We had a great time driving through the countryside and may now do the K & A next year. On the Thursday Nathan, our nephew, got married to Sev in a old mill in a little village in the middle of nowhere. 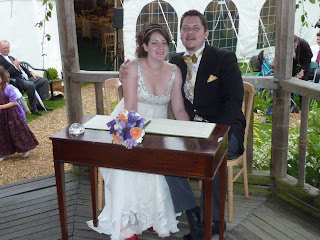 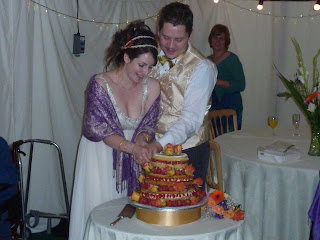 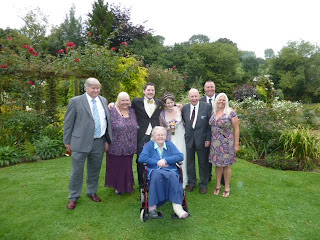 We had a great time.
We made our way back via Stonehenge mixing in with the Bank Holiday traffic. (we don't miss that)
On the Bank Holiday Monday it was Richard and Lisa's son Alex's birthday, who is now eleven, and we had a lovely BBQ in the garden. It was nice to meet up with all of their families and catch up with everyone. 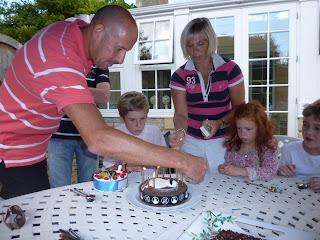 We were then back on the road again but this time it was down to Birchington in the south east corner of England, to see Del's Dad and Terry. We stayed the night taking in the sea air and Terry cooked us just the best Shepard's pie.
In the morning we were off again as Terry and Len had very kindly lent us their camper van. We met up with a school friend of Al's, Zoe who was getting married on the Friday. We parked the camper van near the sea front and was able to help out getting things organised for the big day. We also had time to go through Zoe's old school books and found where Alison had written on one of them. 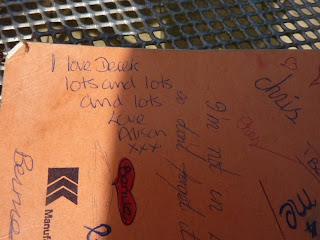 Al also met up with all her young school mates which Del knew, as he was going out with Al when she was just fifteen. The Wedding was fantastic with the venue right on the beach with a sand castle wedding cake, drummers and a 1940's Fish and Chip wagon serving food, with music to die for. 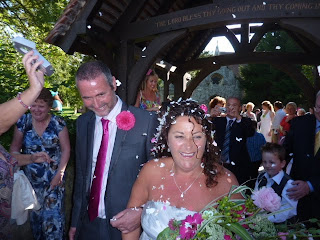 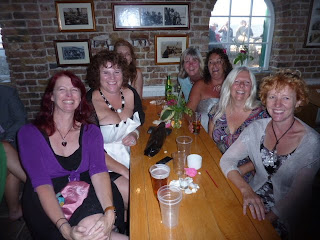 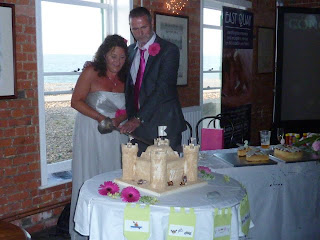 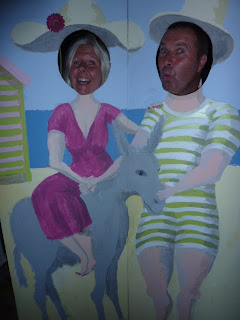 We all danced the night away and reminisced on the beach with the sunset...perfect!

After getting over the day we helped tidy up and said our goodbyes before heading back to Len and Terry's and returning their camper van.
It was a nice surprised to have lunch with another family member we hadn't seen for years. Mark and Stella (one of Bill and Sheila's boys, and Del's cousin) had turned up for lunch so we had the chance to catch up with them as well. We left later in the afternoon and popped in to see Steve and Erica who had just flown back from Florida. We got back to Al's Mum and Dad's for the evening....
We left for the train in the morning and got back to Derwent6 about 3.00pm today. Wow!
So there you go!!!! yes we are knackered, but we were lucky enough to go to two lovely weddings. You will be able to see all the photos on Al's Facebook page!!!!
Derwent6 had a few cobwebs outside, but had been in good hands. It was lovely to get back to the peace and tranquility of the canal and continuing our adventure tomorrow, we hope!!!!.
Posted by Del and Al at 7:50 PM

Nice to hear you back on board we missed you when we got upo to where you where moored but the boat looked fine (apart from the brasses a bit dull) hope to catch up with you another time.

Ohhhh sorry we missed you. Those brasses are gleaming already! Hope to see you soon....

Hi both,
Started to worry when there were no updates. Glad to see you were having a great time and all is well

So pleased your back, I was realy missing my daily updates!

Hi Steve & Chris
We had a really great time thanks, but it's good to be back! Hope all well with you

Hi Stuart
It did us good to have a break from the blog, but we're back on it now. Glad you enjoy reading it...