Aching from the three hectic days we had a bit of a lay in and didn't wake up till 9.30am, and guess what the weather was beautiful sunshine.... Typical!!!

We said goodbye to Pat and Keith for the day, who had visitors Marcus, Ann and John and were on a trip to Banbury. 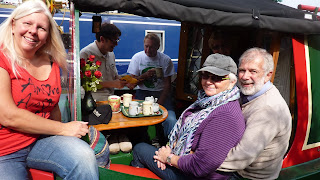 The campers were already on the move and the queues were a mile long. The school at the gates was serving a drive through breakfast for them as they headed for the main roads, a great idea.... 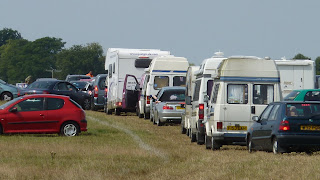 After we had showered the queues to the locks were fourteen boats deep and there was a three hour waiting point. They had best put the kettle on........
We (feeling smug) sat out in the cratch and just watched it all going on.... People trying to moor for the locks with no spaces and people trying to put their tents down and not having enough room in the boot of the car.... We love people watching!!!!!
Del then went over the brasses while Al cleaned up the inside. The boots were clean and put on the roof to dry.
Al popped up the shop and got a paper so we could catch up on the news.
At this point we would just like to thank all those people we met over the weekend we just had a fabulous time!!!
We said our goodbyes to a lot of boats as they left today, n.b Bones (a fellow blogger, see link) being one of them. 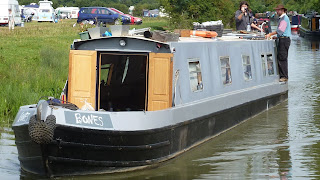 Everyone we have spoken to has said how they really enjoyed themselves, how would it have been if the weather was better......
We just chilled with the papers in the cratch till the last campers left at 6.00pm and then Pat and Keith arrived back from Banbury just before sunset. We sat and had a few beers with them before we had some dinner out in the cratch listening to Bruce Springsteen late evening!
Posted by Del and Al at 3:43 PM