Thanks for a great Christmas and New Year!

Well here we are into 2019 and to be honest its just a nice feeling to say we have made it.. We have great plans for the new year and hope you enjoy following us.
So what have we been up to over the Christmas period? Well lets start by saying we ended up making the most out of our hire car as we spent 18 hours in it travelling about, due to the traffic..
We first went to see Del's Mum and husband Keith, and they cooked us a lovely roast dinner and it got us into the Christmas spirit.
We then went down to Trowbridge and to see Cliff and Lou, (Del's brother) and all the kids, dropping off all their presents. It was so lovely to see them all in their new pub The Black Horse.. 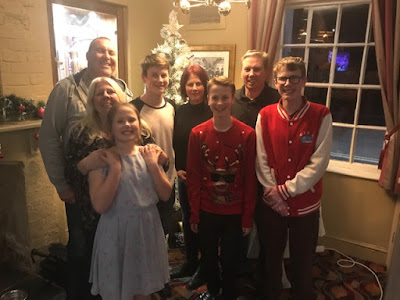 After five hours in the car, we drove back to Derwent6 that night.
The next day we drove down to Farnham to see Al's sister Jo and husband Brain who were so pleased to see us. It was also lovely to see Nephew's Matthew and Nathan and all the kids together, and we all sat round the table for our first Christmas dinner.. We left at 6.00pm and drove to Kent, dropping off more presents to friends Steve and Erica.. We then went to friends Bernie and Sarah's who were kindly putting us up for a few days..
The following morning was Christmas eve and we always put a wreath down for Al's Nan and Grandad, and then drove to Shoreham in Kent and walked up the hills to visit Al's Mum and Dad at the cross.. 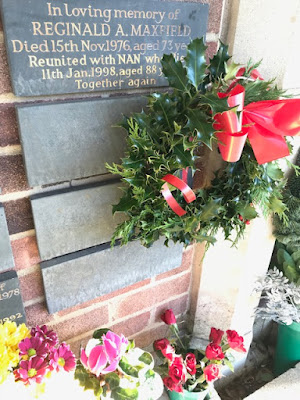 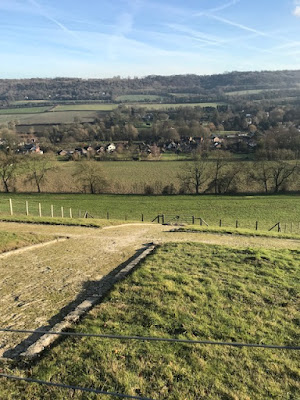 It was such a lovely sunny day as we sat overlooking the village remembering the good times.. 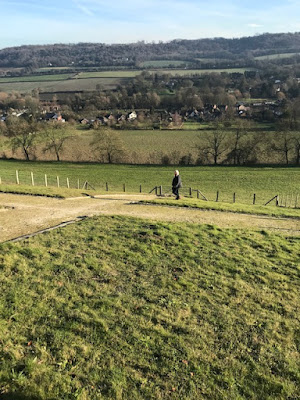 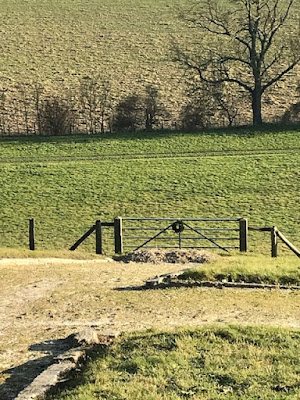 We were also blessed with a Robin who joined us as the tears ran down our faces remembering the ones we had lost.. 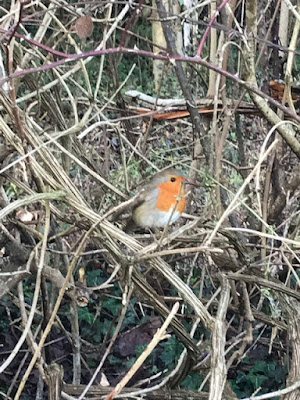 We had a lovely lunch in the Crown pub, which was our local when we used to live in Shoreham..
From there we went to Terry's and Ron's (Del's stepmum) and dropped off more presents before we went back to Bernie and Sarah's. The plan was for the boys to go to the pub with the girls going to midnight mass, but Bernie had a problem with his foot, so it was drinks round the Christmas tree for them while the girls enjoyed a good service with carols in Aylesford..
We woke up to Christmas day, and looking round the Christmas tree Father Christmas had been good and proper.. We so enjoyed opening our presents with the smell of a 12 pound basted Turkey cooking in the oven. 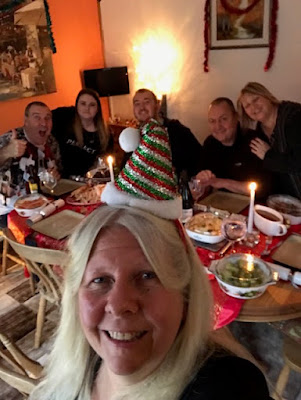 Christmas dinner was lovely, and we were honoured with all the family together. We also had more table presents. 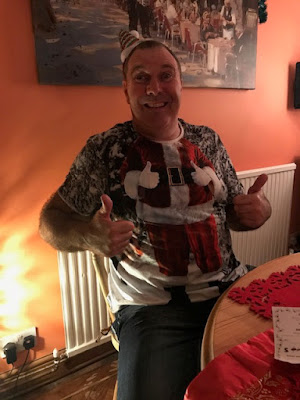 After some telly and games and we crashed out, the day went so quickly..
In the morning we had a light breakfast and then gathered our presents and set off to Whitstable for midday.
Here we saw Zoe and Greg, with Baz and the dogs Jumble and Rummage, and new addition Sprout..
After a quick catch up with drinks it was a short walk down to the Neptune pub where more drinks followed with some games in the pub.. 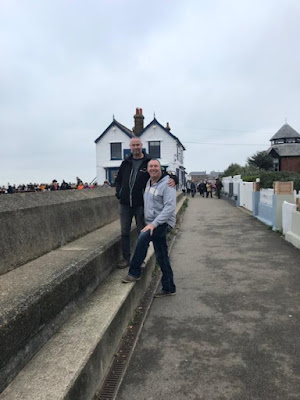 We managed to get away late afternoon and had a lovely Boxing day lunch with all the pickles.. You can guess what happened next as we all crashed out all over the place, in recovery mode..
We surfaced at about 9.30pm and managed to get things going again but the time just flew again and it was soon time for bed..
In the morning, a bit worse for wear, we took everyone out for a hearty breakfast down at the Windy corner café..
We left at 11.30am and headed back to Derwent6 avoiding the January sales traffic at the Dartford tunnel on the M25 by going the other way round.. WRONG! that was a bad move and we queued all the way round the other way to the M40, and it took us six hours to get back to Rugby.. We then had to warm the boat up before we could go to bed..
We then had two recovery days before we had guests Terry and Ron who drove up from Kent to join us for new year!
We had a lovely roast dinner and chatted about our Christmas experiences..
On New Years Eve we were up early as Terry and Ron had always fancied going to The Black Country Museum in Birmingham. 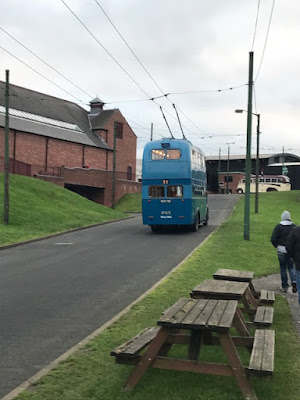 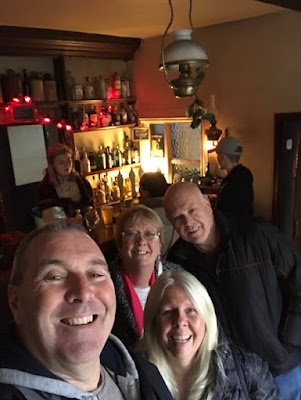 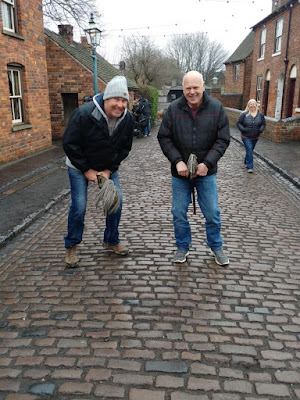 We had such a lovely day, going mining and Terry even getting the cane at school for wearing nail varnish. 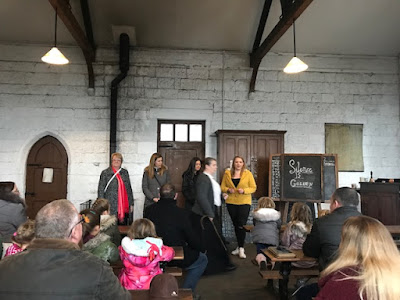 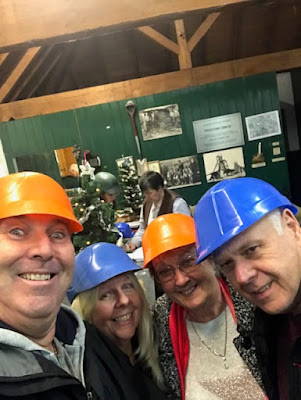 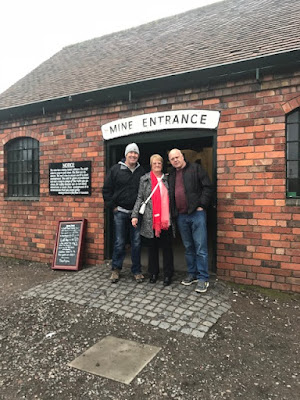 We even got to see some of the props from Peaky Blinder's. (who were filming here 2 weeks ago) 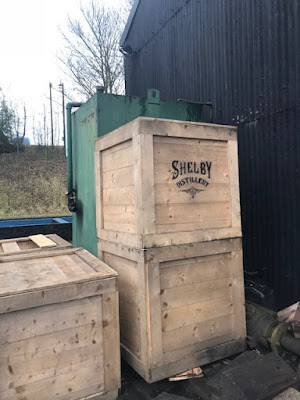 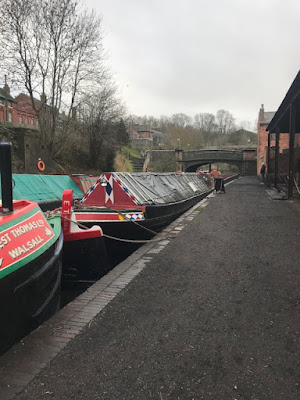 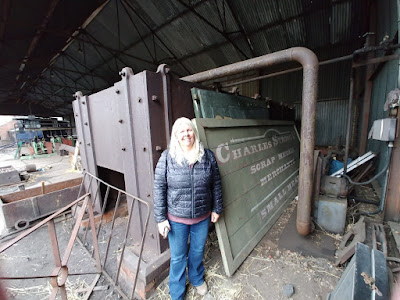 We then went to Mad O Rourke's where the Dandy comic character Desperate Dan's pie factory is situated. 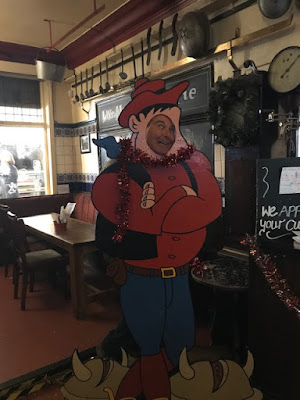 Full of Cow Pie we made our way back to Derwent6 where we got changed and then set off down to the Bulls Head pub in Brinklow to see in the New Year, with live music and a Piper at midnight.. 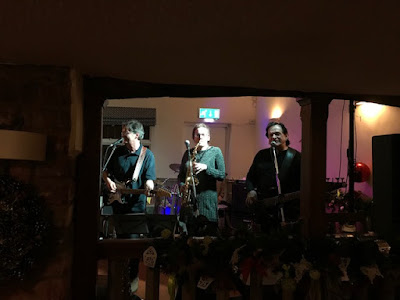 We got back to Derwent6 at 3.00pm..
The following morning was 2019, and in recovery mode again we surfaced at midday. The girls managed to get a bit of sales shopping in before we had lunch booked at the Dun Cow in Dunchurch.
We were recommended by three people to go there and they were so right. It's a huge pub but the food and service was top notch..
Tummies full again we went back to Derwent6 and chilled for a few hours before we all decided to go to the Merchants Inn in Rugby where they were holding a Pub quiz on 2018. 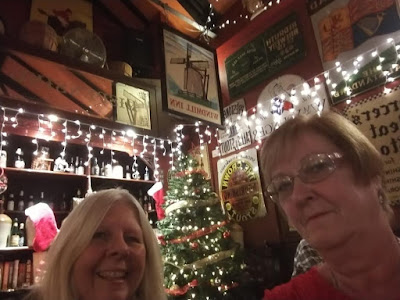 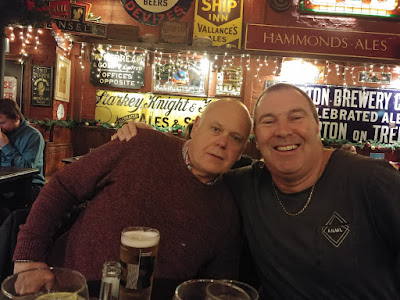 It was a great atmosphere and such good fun and a pork pie kept us going.. 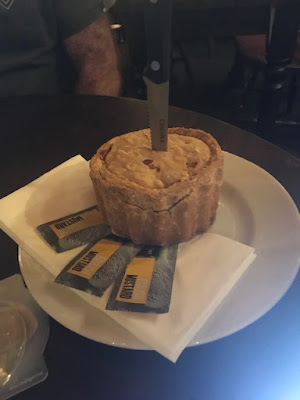 No prizes for us but we held our own with some really good quizzers around and a £50 top prize.
We returned to crash out after another good day..
In the morning it was sadly time for Terry and Ron to make there way back to Kent.. We had some bacon sarnies and then said our goodbyes! 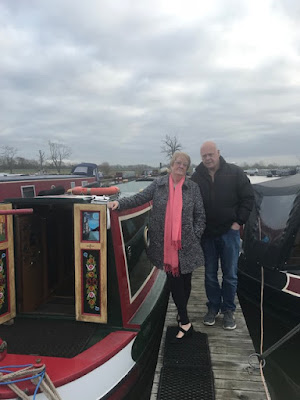 Things always seem so quiet when we have guest leave, but as we are still on shoreline it is a good time to get the bedding washed and sort ourselves out a bit..
So we have had a fantastic Christmas and New Year, so sorry for those we didn't have time to see..
Its time for us now to make sure we have a Great New Year! Loads of Plans!!!

HAPPY NEW YEAR both.Sounds like you two had a real fun packed Christmas period. Well done for making the most of it. I see from an earlier blog that Del's back is still giving him problems. As you are in Rugby, there is a very good chiropractor that I can recommend. He was recommended to me by Jaq Biggs:- Peter Sawyer 01788 565100 80, Clifton Road, Rugby CV21 3QX. Working hours Tues 3-6pm. Thurs 9-6pm. Sat 9-1pm, but you can make an appointment on this number at any time. Visitor moorings are just south of the new bridge near Clifton Cruisers, which I reckon you will know. The practice is 2 bus stops up the hill from Butler's Leap, called Clifton Road Chiropractic, which you can probably walk to, unless like me, you suffered from angina at the time! As I remember it was £60 first appointment and treatment and £32 the second time. This is worth a look:- https://www.cliftonroadchiro.co.uk/

Absolutely fabulous, I have enjoyed reading the action packed account of your travels throughout 2018 and look forward to what is in store for your 2019 blog. All with more of your lovely pictures of course.
Wishing you bothe a healthy and happy new year.
Love from Keith and Ann Xx

We had such a fantastic time on board Derwent 6 and our trips out.It really was a great start to the New Year.We all have such good things to look forward to.Hope to be back on board in the summer.All our love Terry and Ron.xxxxx

Thanks Ray, we've passed this chiropractor on our travels, so its really good to know someone that has been there. Thanks ever so much for the information and recommendation. Will certainly give them a try if there's no improvement....