New friends through this blog

The wind today seemed even stronger than yesterday, so again we won't be moving. In fact we had four boats go by us this morning, sideways... We had a morning with our music up loud and Del trying to play his guitar. Al even got her recorder out at one point and Derwent6 sounded like a folk festival. In the afternoon we had a tap on the side and it was Martin and Sarah with dog Merlin. It's nice when people who follow the blog know more about us than we do ourselves. They knew all about us, and we had never met them before, but it was great to make new friends, that's what blogging is all about. 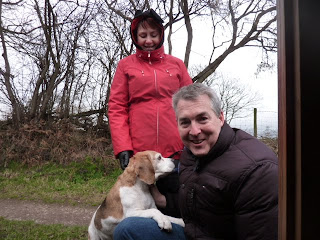 It was great to see you guys and hopefully we will be meeting up later this month.

Martin had given us a useful tip that a tree was down in the canal further down the cut, so Del walked down to have a look. Sure enough there was and he pulled it out and let it dry in the wind on the bank overnight. A job for tomorrow.....

The evening was taken up with Yep Dancing on Ice!.....another of Al's favourites.
Posted by Del and Al at 9:39 AM