As the weather looked terrible this weekend we thought we would set our priorities on sorting out this water leak that we found when the water pump stopped working the other day.. We just couldn't get rid of the water around the pump, which could have been leaking for ages as we have had no reason to look at it..
Remember it turned out that the wiring had corroded and broken which was why the water pump stopped working, luckily! 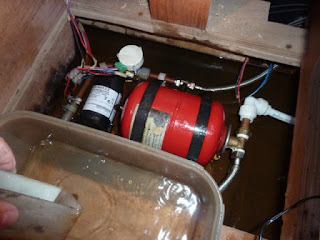 So where is the leak? It could be rain water, canal water or fresh water and we need to determine which one it is. We cleaned out the area the best we could and then used baby's nappies to soak up the excess water which came from under the floor boards when we walked around the boat.. 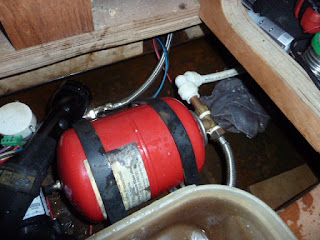 The following morning all the nappies were soaked and had soaked up a lot of water. These are amazing, as when you lift them out they don't lose a drop. On the second day two of the nappies were soaked and dry patches appeared and by the third day only one was wet, but it didn't seem to dry right out..
While all this was going on we were using our water tank, and the level had come down to a quarter of a tank, so maybe this is why the leak had slowed down. It could also be that the bow had risen out of the canal water as the empty fresh water tank was less weight. The leak could have been where we were very low in the water with all the weight of wood and coal on the roof. Rain water now seems unlikely as it had slowed down and it was still pouring hard outside..
When we blacked Derwent6 in April we didn't notice any damage to seams or the hull in general, so it is pointing to the water tank.
The weather looked ok for Tuesday so we thought we would move then and pick up some provisions, including a new water pump, as the one we had had been submersed in water and could pack up anytime.. 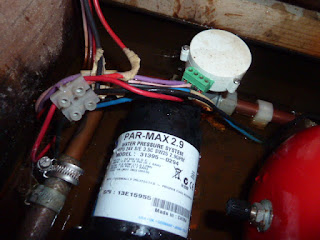 Oh no, I hope you get it sorted. Just keep your fingers crossed its a leaking pipe joint you haven't found yet. If yours is built like ours the cabinet work at the front of the cabin has to be dismantled to get the tank out. My worse nightmare! Good luck.

Hi Geoff, Thanks. Yes you're right, our worst nightmare as well! At the moment its a process of elimination, just keeping our fingers crossed. Water leaks are a bugger to find!