Well yep you're right we haven't blogged for a few days and yep you're also right there is something wrong!

We were out at the pictures watching the Harry Potter film when we got a text saying Del's dad (Len) had been omitted into hospital again after a CT scan. They had found some shadowing on the brain and it needed to be investigated. After a full body MIR scan they found he has cancer of the lung and it had spread to his brain. To cut a long story short we were told there was no light at the end of the tunnel, and we were told he doesn't have very long. There are four categories of cancer, one to four, Len is at four. We are livid that he has only recently had a kidney transplant and this was not checked before hand, but he did smoke in his early days and that is that.
So Len is now back home and we have been spending quality time with the family and friends and we are grateful we have the time to do this. 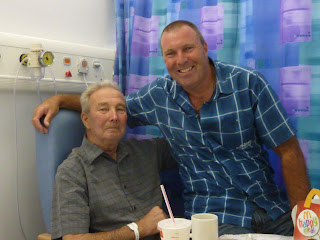 Today we moved Derwent6 and managed to find a marina which will be able to accommodate us. This blog will be updated, but not everyday, as minutes are now hours to us and the camera is pointing at one person only.
Posted by Del and Al at 6:43 PM

I'm so very sorry to hear this. best wishes to all the family.
S

Thinking of you all at this difficult time, there is a lot of spirit and understanding behind those smiles on the photo, it's so important to keep close as a family at times like this.

Thinking of you all x

So sorry to hear this. We are thinking of you both and will keep you in our prayers.

Chris lost her dad to bone cancer early this year so we completely understand what you are going through. Try to be strong for Len's sake it will make all the differance for him. Family must come first, we'll all still be here for you when you get back. God bless and hugs.

Hi there just read about Len, what a choker. Please remember our thoughts and love are with you and the family, give Len a hug from the Odells, tell him we love him, and also one for Terry.
Love to all
Barb & Les

We are so sorry to read about Len. You both are in our thoughts at this time. These last few months have been traumatic for Del & Al. Our best wishes are sent with this message. Love from Chas n Ann

So sorry to hear your news. What a blessing you are able to give time to be with Len right now. These will be very special days.
Thinking of you.

Wondered why we hadn't seen you. What a shock! SO sorry to hear about your Dad, Del, but glad you were able to go to be with him.
You'll be in our prayers and thoughts. Enjoy the time you still have to share.
With love
John & Fi
nb Epiphany

So sorry to read about your dad Del, we will be thinking of you all

It was good to see how strong you both were when we met.. still thinking of you.. Sue xx

Sorry to hear about Len, thinking of you both at this sad time. Lynne and Paul.

There are lots of us out here rooting for all three of you. Make the best of what you have.

We are thinking of you and the family. it is such sad news for everyone concerned Hugsssssssss xxxxxxxx

I just hate reading this Del as like so many in the world it is close to home.
All i can say mate is spend as much time as you can with your dad. Laugh with him and cry with him, be there for him as he was for you.
Thinking of you, Al and Len

I'm so sorry to hear this sad news. May you gather good memories with your family and wrap them close to your hearts. Those who are remembered, live. I'll be holding all of you in my thoughts.