We had planned to move after a few days here at Flecknoe but Clive and Jackie on n.b Jacana had a problem with their batteries and it was time to get to the bottom of it.. First we tested the batteries with a small battery tester Del had and it was checking all the charge rates from the generator and the engine alternators.. All these came up alright..
So we then carried out a discharge test to see if something was draining the battery overnight and when tested this also appeared all ok.. We then tried turning off the fridge overnight and on another night turning off the inverter, and the batteries were fine with the fridge off, until the fridge was turned back on..  The drain was horrendous and they were soon showing just 10.8 volts, so it was back to the batteries.. Another test was carried out but this time in a low state of charge and they all seemed even but very low..
The problem turned out to be when we took off the caps to each 2 volt cell the acid level was only just above the plates and it was in need of some distilled water.. Straight away we could see a difference as the batteries tried to recover and needed a good charge..
The following morning things were all working fine and the batteries were holding charge and running the fridge fine as they recovered after the fridge had got to temperature..   So fingers crossed that has saved a set of batteries and Clive can put on his music and other appliances without any more problems.. 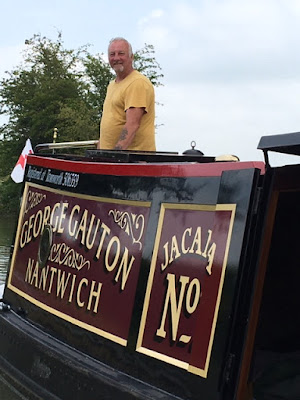 We have had a lovely time with them both and the wildlife hasn't let us down with owls and the swans keeping us all company.. 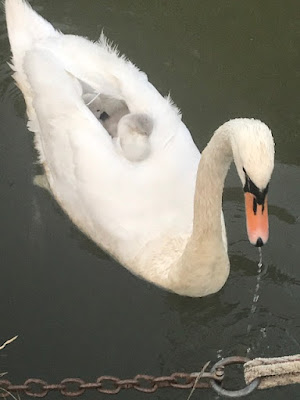 We also had a takeaway for the first time since the virus and ordered it from the Olive Tree pub in the village. 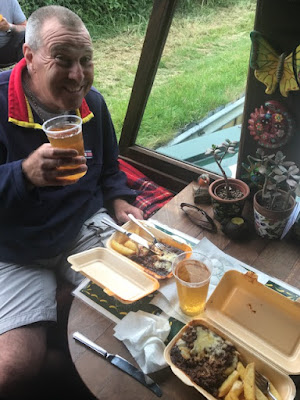 The landlady dropped it down to us in a box and we met at bridge 102, it was delicious, all this including pudding and drinks for ten pound...
Oh and we did see Timothy West and Prunella Scales with their son out on a day trip which was nice to see. 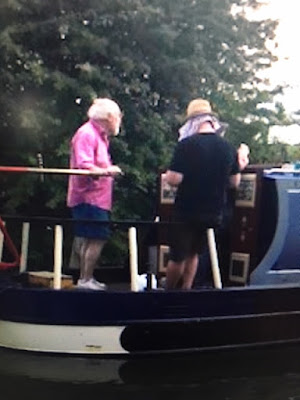 We have been here a week now and loved every minute of it, but we need to move tomorrow for water as we have got a bit lax on water use as we had it so easy during lockdown.. 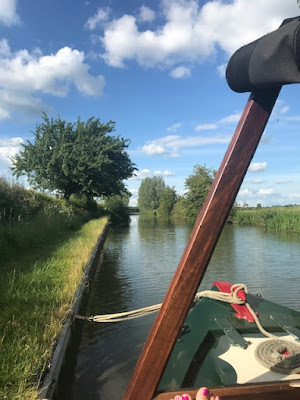 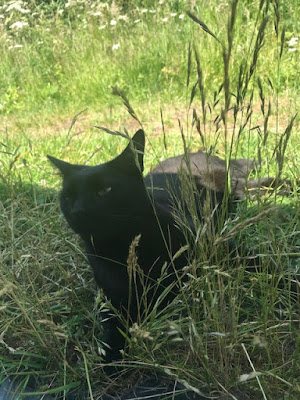