Never rains when it pours

We decided to stay put for the weekend and went for a nice meal over at Grove Lock pub.
We run the engine in the morning and Del checked the coolant before he did and again noticed oil in the water. 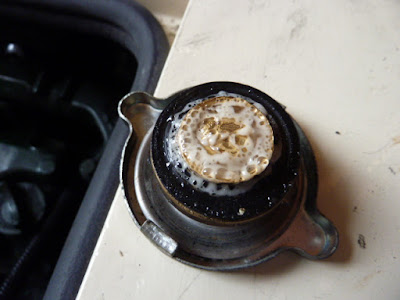 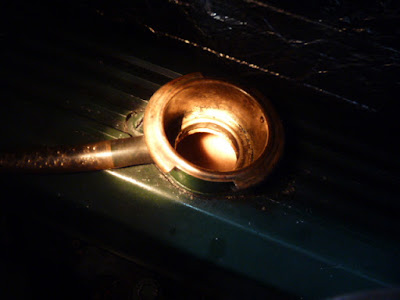 This could be one of three things...

A/ The head gasket

B/ The Gearbox Oil Cooler

For a while now Derwent6 has been loosing water when it was a freezing night and we had to top up the coolant before we could set off. It was very difficult to see where it was coming from due to the fact the engine covers are awkward to remove. Del had thought it was a hose (which is a return from the clarifier) so changed it to make sure it wasn't leaking.. We don't get the leak very often so it has been very annoying.
This is different though, oil in the water is not what you want, and the engine appears to be running ok and we have no smoke from the exhaust.. Del then asked Beta for some advice and some good advice was given back
They feel it might be the gearbox oil cooler which might have an O Ring damaged, and that's where the leak, when its cold, appears to comes from.. They also feel it shouldn't be a head gasket as the engine has to have been overheated to normally damage it.
So here we are trying to sort this out, more expense, more work! We just need to know can the oil cooler O ring make oil go into the water?.. Watch this space!!
Posted by Del and Al at 4:46 PM

Have you looked in the gearbox to see what that looks like, you may find a trace of water also what is the oil filler cap on the engine like?

I have had to replace these O rings several times, a simple if messy job. They are available on eBay.

Some recommend changing them every service but being lazy I wait until they leak!

Hi Brian, no there is no water in the gearbox because the oil is changed too frequently. Its looking like a gearbox oil cooler.....

Hi Chris, thanks, when we order the oil cooler we'll be ordering some spare O rings....