Pancake day and the Mile Roses

It was one of those feel like doing nothing days, but it's shrove Tuesday and you have to make the most of things..
We watched the Olympics in the Morning until just after lunch and then Al cooked a lovely chicken dinner followed by pancakes, of course. Al has progressed with her tossing skills and didn't drop any of the three she made!.. 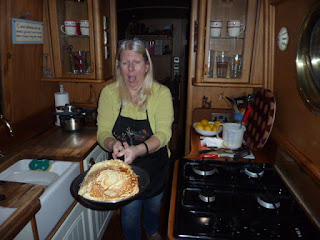 After we had full tummies we got ourselves ready and then walked into Brinklow as we knew it was folk night with the Wurzel Bush club, which funny enough is run by Eric from Brinlow Marina and Dave Sampson..
They has a guest appearance of a brilliant folk band called "The Mile Roses" which are a blend of folk and country and they all write their own stuff.. Try and catch them on tour if you can. We were drinking and foot stomping all night till late.. 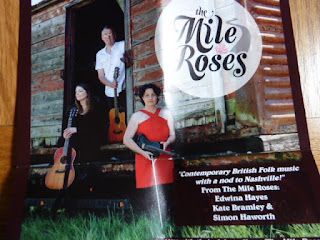 When we came out we just felt we had a great time. It was very cold when we left and it was showing minus three. The bonus was that the towpath was frozen and not muddy and we had left the fire ticking over so Derwent6 was warm and toasty when we got back..