Brinklow and stuck, with a seal of approval

We have had a lovely week at Brownsover near Rugby. It has all the things you want in the winter months like the cinema, shopping, and food. It also has water, a rubbish disposal, and an elsan, and (apart from the muddy towpath!) the best thing is that it has been empty of boats here with the canal closure at Clifton.. 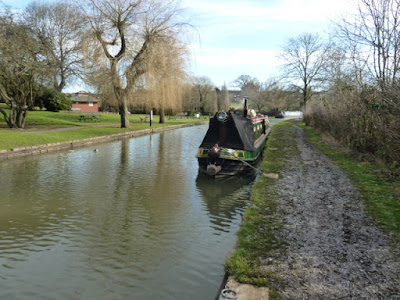 Al has been shopping every day while Del has rested his groin and back. So no boat cleaning, no engine work, no DIY, and definitely no lifting.
It was a lovely sunny day and we had a sprinkle of snow, a good time to cruise.. It was up early and first the washing went on using up the water in the tank. Al did a last top up of filling the cupboards with food and then we pulled over to the water point. We filled the bow and emptied the stern and then set off.
It was pleasant cruising but there was a lot of wood floating in the canal were it had been a bit static with not much boat movement. You had to be careful that you didn't pick up something which would wedge in the prop.
We got to Newbold where it seemed a bit busier, but still spaces. 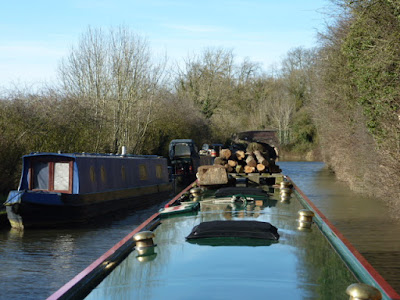 We then got to Newbold tunnel and it seemed a bit haunted as it was so quiet. 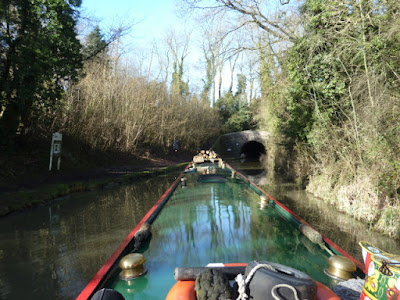 We got out in the countryside and were surprised to see five, yes five guys cutting the hedges back and mowing the towpath, CaRT know how to spend their money they haven't got.. 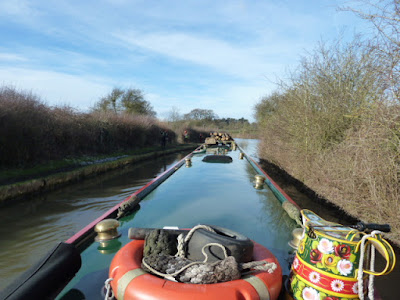 We then got to Brinklow and thought as the weather was good we would turn, bad move! 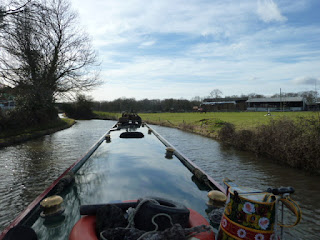 We had never turned here before on Derwent6, and stuck the front end into a bridge hole, but the canal went back on itself, and on turning in the stern got caught in the mud and we lost steering and got wedged across the canal..
First Al then Del tried to pole the front round but it was stuck on rocks and we couldn't get off.. Luckily a boat must have been behind us and a guy appeared with a smile on his face "wanna hand" he said..
Del threw him the centre rope "That'll cost ya" he said laughing. Poling and pulling we got free and thanked the guy who decided he wouldn't turn there!..
Relieved, we moored up and sorted ourselves out, yep we're still learning lol! 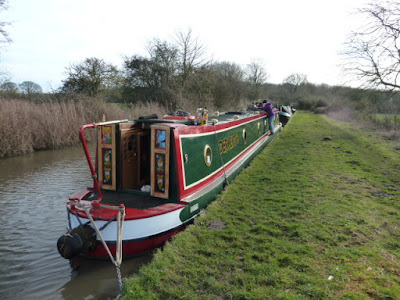 We set up telly and then met up with Terry on n.b. Aqualady, he helped us when the bottom pulley fell off the Beta 50 by letting us link into his generator.
As we are on the pulley issue, we have had a problem with the oil seal now which appears to be leaking in the sump pan.. I take it this got damaged by the pulley nut coming loose and rattling round in the seal. It's not leaking bad (one small drip a day), but will get worse over time. Its a shame Beta don't supply a new one in their modified pulley kit, knowing a new pulley will need a new seal. We had to take a chance at the time as we just needed the engine running at any cost.. In Beta's defence they have offered to send out a new seal as a good will gesture. We have now done 100 hours on the clamp, but the belts need checking as we get a screeching when the engine is cold, lets hope its not that pulley. Del hasn't been able to look because of his groin strain!..
Oh we still haven't got any answers on the questions we asked them, but they have offered our money back if we take off their modified clamp, for their design fault, and put it in a box, and send it back to them.. No this isn't a joke!!!
Anyway, Terry bless him, then offered to saw up our wood as Del was struggling with his groin strain. I think he also wanted to show off his latest chainsaw which cut it all up like butter, so we might be investing in a new chainsaw..
We settled in and then watched the Olympics all afternoon, smug that we had beat the rain we were expecting tomorrow..