60 Today, tomorrow and the next day!

We woke up at the Hard Rock Hotel in London's Oxford Street and Del opened up his presents and cards Al had brought from Derwent6. We then took a walk and did a bit of shopping and Del brought a couple of T Shirts. It was then check out from the hotel and a black cab to Victoria station where we got the train to Otford in Kent.. There waiting was a hire car and it was off to friends Bernie and Sarah, where David had brought us pie and chips to line our stomachs for a session later that evening..
At 6.00pm we made our way over to Maxine and Grahams at the Moody Mare where Del knew they were having a small gathering, but 40 people turned up and it turned into a bit of a party.. 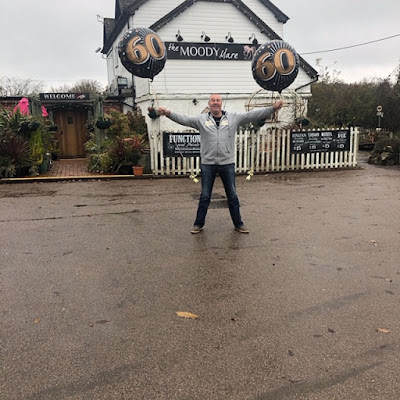 Al had arranged some food with Ben the manager running the restaurant. 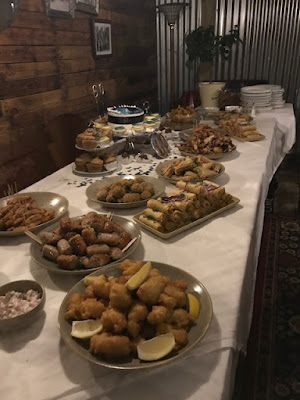 Terry (Del's stepmum) had made a fantastic Birthday Cake and cup cakes with a picture of Del on them.. 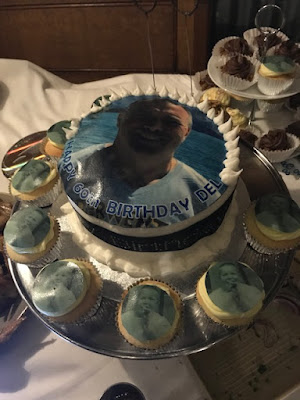 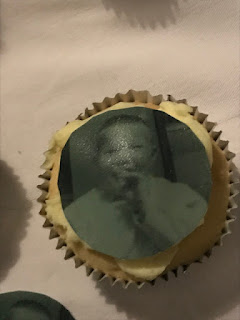 Ron had stuck up some old pics around the room and also they had brought some lovely 60 balloons. Thank you both of you! 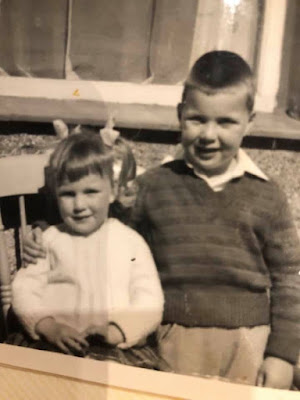 Also a thank you to my sister Deb for supplying some of these.. 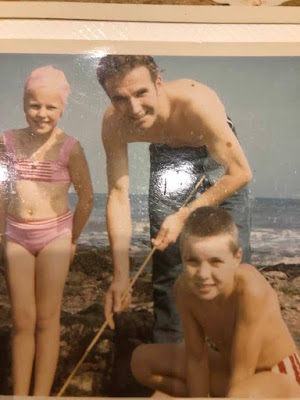 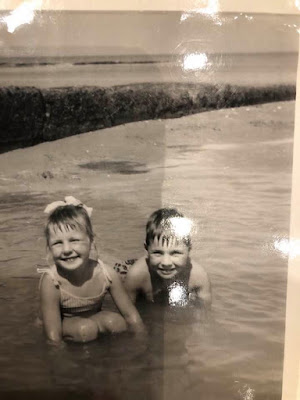 It turned out to be a great venue as it allowed you to sit down and chat if you wanted and the live music in the other bar was great background noise.. 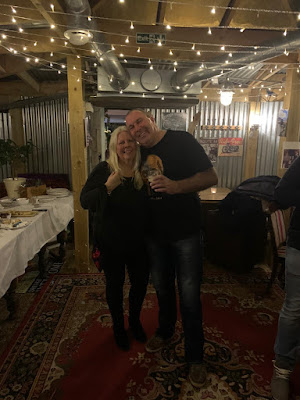 Del had five cousin's turn up and it was just lovely before Christmas to catch up on the year.. 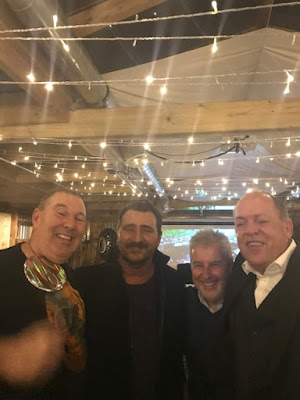 Del had all his best mates round him and with a beer in hand you can't ask for more than that.. 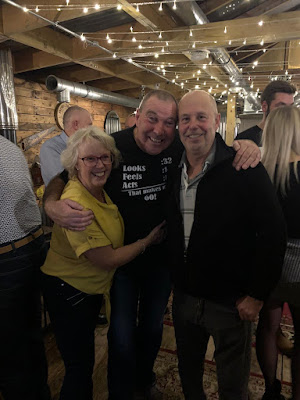 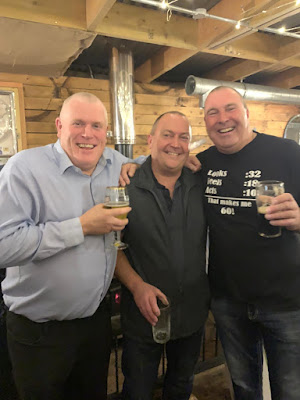 Most stayed right until the end, which just shows how much people enjoyed it.. 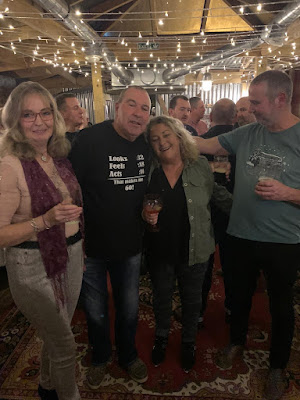 We were lucky enough to be staying with Maxine and Graham so it was a short walk up stairs where we crashed out..

In the morning we chatted with Maxine and Graham and then Zoe and Greg showed up as they had camped in the car park in their campervan. We then all went down to the greasy spoon for a good fry up and bring us back to the land of the living.. It was then back down to Bernie and Sarah's to get ready for another surprise.. 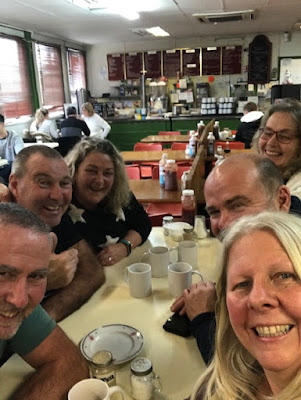 We ended up going to an old haunt in Seal, the Buck's Head, where we did some courting many moons ago.. Del was given his present by the boys, which turned out to be a small R/C carbon glider for Del to build on Derwent6..

The following day, we then had a lovely meal together just like old times (with our sons and daughters).. 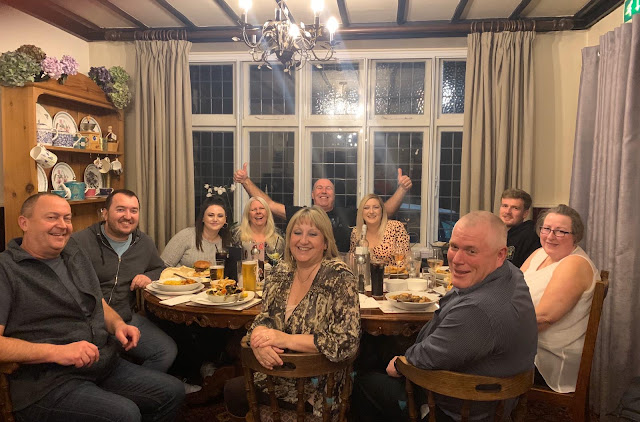 The next day we went to friends Richard and Lisa who had arranged a Sunday lunch for us both.. It was lovely to see them and catch up, with a little reminiscing over old times.. Del also got a nice little Colin the Caterpillar birthday cake... 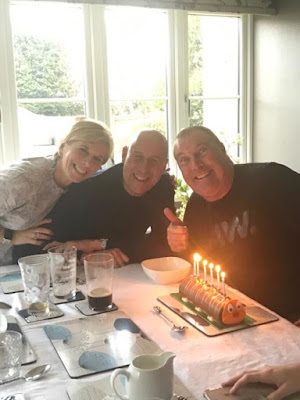 We drove back to Derwent6 on the Monday and picked up Tooty. Del warmed up Derwent6 and Al did the food shopping before we snuggled down to recover from a fantastic week...
A massive thank you to everyone involved but most of all my wonderful wife Al. Without her it would never had happened.. ((((HUGS)))) 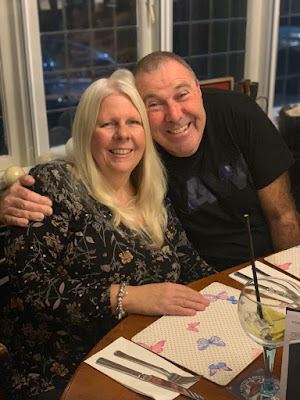 Belated happy birthday Del! We like the Moody Mare — been there a few times.

Happy birthday, Del. Sounds like you had a great extended birthday celebration - always the best kind, I think. As we get older I reckon it's important to have long birthdays to match the years we accumulate!

Big hugs to you both,
M&D xxoo

Thanks Adam, Our friends Maxine & Graham own the Moody Mare, so when you're next there say hello :-)

As claimed by Stanford Medical, It's indeed the one and ONLY reason women in this country get to live 10 years more and weigh 19 KG lighter than us.

(And realistically, it really has NOTHING to do with genetics or some secret-exercise and really, EVERYTHING around "how" they are eating.)