Oh No! Not the Crankshaft pulley again

We really wanted to move today as we hoped we could make our way down the South Oxford, but that was never going to happen as we were stuck waiting to see what was going to happen about our alternator belt, which was in shreds.
After the email sent last night, we made a follow up call at 8.30am and spoke to Sue on reception. They were brilliant and ordered the belt straight away and also let us have one as a good will gesture. Once the part had arrived, Kevin even came out early the next morning to deliver it for us and then we got a email from Sue to authorise Del to fit it in case anything went wrong in the future, so it didn't affect any warranties.

Del fitted it in the morning after collecting it from Kevin at 6.30am, and by 8.00am the engine was running. There was a strange rattle coming from the lower half of the engine, one we had heard before..
Del said to Al "We won't be moving today" as he needed to check the rattle out.. So it was all the covers off and it was clear to see that the bottom pulley had moved again..

This should never happen on just a belt failing, so it needed investigating..

It was checked when the covers were off at On Board Energy and before the new alternator was going to be fitted, and things appeared fine, but after the belt broke we had the same rattle back as when we had a problem with the Crankshaft pulley... 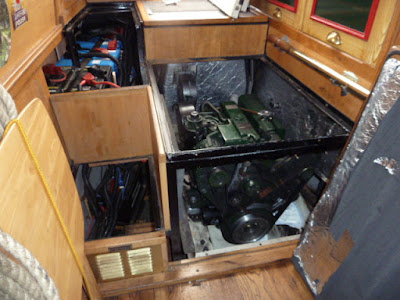 It was a bit of a shock when the covers were removed again to see the paint marks had moved, and you could clearly see and feel there was too much movement in the pulley.. This picture is before the alternator was fitted. 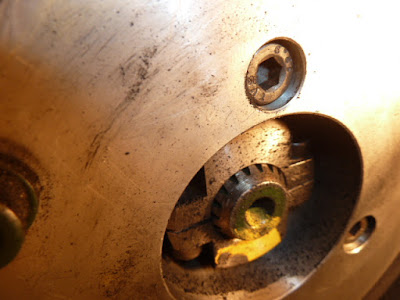 And this is what Del saw when he removed the covers. 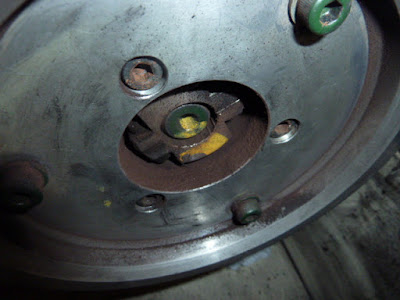 Oh No! it all has to come off again, as you could feel the movement from side to side of about 10mm. On the removal of the other belts all became clear that the keyway had worn again. 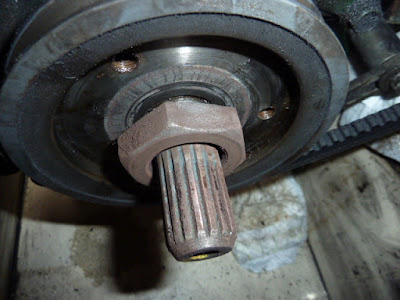 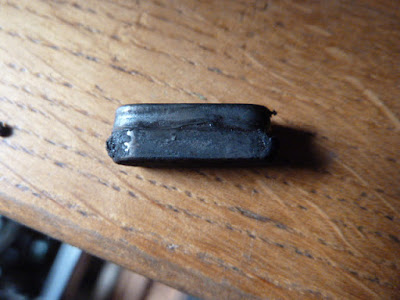 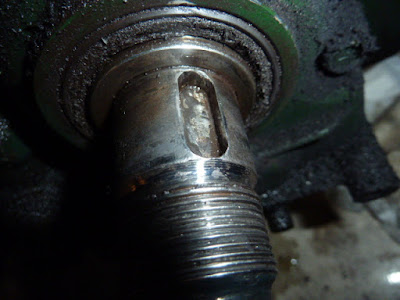 This can't be happening, after all, a crankshaft pulley should not ever come loose in the first place. Lets face it, it should NEVER have to be removed in the life of an engine, ours has TWICE!
We have never had the confidence in the engine since the first time the pulley came loose, and believe me it has been checked regularly as you can see from the pictures.

Didn't you have a warranty? I hear you ask!
A. Yes it was a 1000 hours or 12 months, which should tell you something!!
Ours lasted 1200 hours and 14 months so just outside of our warranty.  Pity that!

So it was a call to Technical at Beta, and they were very helpful and also felt sorry for us. They told us we would need to fit another modified pulley, which has been modified again. The first one has got a slightly splined shaft and the new one hasn't because it wasn't very successful. You can just see the splines on these pictures. 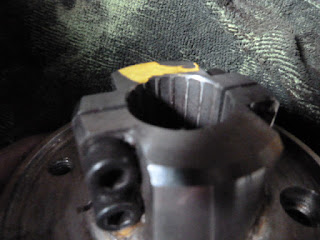 So we need a second new modified clamp, a new engine alternator pulley, a keyway and crankshaft locking nut and a set of belts. As a good will gesture we could have these at a special net price plus VAT, . Oh! and they threw in a oil seal for the new crankshaft pulley FOC. Happy Days!

The great thing is the batteries were at 100% and only dropped to 80% overnight, and with the nice weather were back at 100% by mid day by the solar panels.. And we are saving diesel of course! (trying to stay positive here!)
We should of had Tanya and Paul coming up! The good news is that we have loads of food and beer on board and the way we feel we might just drink and eat it all..
Posted by Del and Al at 4:36 PM