We have been on these 14 day moorings for a week now, and can you believe it, we haven't had to run the engine..
Ok the weather has been good and the solar panels have helped, but its the time it takes to charge the Lithium batteries which makes the difference. Just four hours of sunshine and they sky rocket back to 100%.
So we have started to use more electrical items to get them to drop a little, as they work best between 60% and 80%.
Al now uses the Dyson hoover more where she used to brush up. We now uses the bread maker more where we used to have to go and buy bread, and using the slow cooker more. All these things are used when we're not moving, in fact we are not even running the engine at all..

Our big test today was that we would run the washing machine as it was a nice sunny day.. This pulls over 2000 watts and we wanted to see if we could use it without the Travel power generator or running the engine..
Al put it on and it didn't pull much at all as it filled with water and the drum turned, in fact it took about 200 watts.. The big thing was when the heater element heated up the water which took in a whopping 2100 watts, so it was a good job we changed the inverter to a 3000 watt. You could watch the solar panels putting in 400 watts and the cooling fan on the inverter burst into life.. Its great being able to see all this happening on the control panel.. 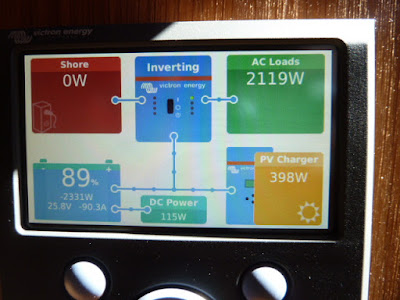 And also on our phones. 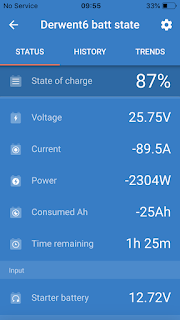 Once the water was heated up the watts dropped back to 200 and the spin cycle didn't use much at all.

This again has made a big change to our life. Before we were only washing when cruising, using the travel power, and pausing the washing machine when going past moored boats.. When we were static we used to have the run the engine at 1400rpm to avoid wear and tear on the engine.
Now, we can run the washing machine when we like, cruising or static. It is still good practice to use it when the engine is running because the domestic alternator and solar will support the batteries.. but it won't need to be paused. In addition there will be no engine revving away in the engine room when static. Amazing!

Del wants to try the immersion heater next on the calorifier to see if we can get hot water, not on shoreline..  This means we won't have to run the engine or the central heating just for hot water, another saving on diesel and wear and tear..

So to sum things up we are making a massive saving after a very big expense. We are not saying that we will get all our money back, but we are sure we will get a big chunk of it back. The most important thing is the quality of life, and all this helps the environment because we don't use as much diesel as we used to.
Posted by Del and Al at 6:15 PM

It must be a great feeling to be totally self sufficient now.
We can sympathize about the grass and stone chips as we experienced the same thing!
I wonder what CRT's reply will be?
K&A xx

The issue you we included above is certainly regard proficient for anyone to work out. the possibility of your article is substantial and It will realize a positive way. battery test equipment