Days 13 and 14 of the Electrical upgrade

So after Kevin had fitted the alternator it was testing time for us.. The batteries had dropped to 76% in the morning and the first thing Al wanted to try was to get some more washing done..
Solar had kicked in and the batteries stayed at 76% so we got a free wash in.
It then came for us to try the engine and check that things would be ok for cruising, so Del started the Beta, and the Sterling Power Ultra Pro 24/24 35A Battery to Battery Charger burst into life.
The lithium batteries started charging fine with a steady 28.3 volts going into them. As we got to 98% you could hear the fluctuation of the engine beginning to kick in again, but it wasn't as bad as it was before the alternator was changed..  As we reached 100% the VE Bus control unit turned off the charging to the lithium batteries like it should, and all the lights on the charger were working ok..
After a hour and a half of running, the lights started to flicker and then went red as the voltage went up to 28.9 volts and the engine become erratic again (still not as bad as before) 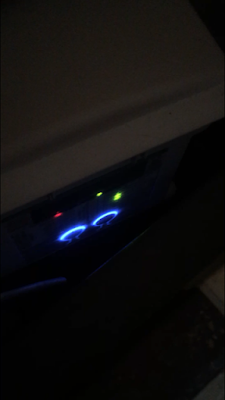 It was saying high input voltage, but kept settling back down again.. to normal after about 15 minutes. It would then put a float charge into the Lithium batteries and go back into high voltage, at times putting 28.9 volts into them before the management system could turn the charge off..  Del slept on it and came up with this conclusion after not much sleep..

Del wasn't happy that we had not got the full Victron products fitted to Derwent6, and felt that over time the Sterling power charger (with an in built fan) would let us down, and to be honest it wasn't working as it should anyway. So a chat to the boss Adrian was arranged at midday.. He is a really nice guy to talk to and could fully understand the way we felt, so made a very good compromise for us to have a Victron 50A Buck Boost DC/DC charger with a very good discount.. 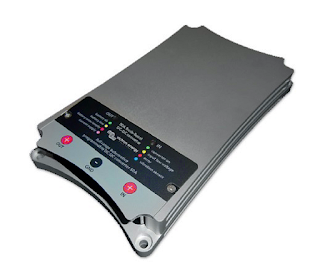 One was ordered there and then and we walked away a lot happier..
So we now have to wait for the Buck Boost to arrive and lets hope its before Easter.. The good thing was that when we got back to Derwent6 the batteries were charged by solar and turned off for the day..
Al cooked a lovely roast chicken dinner and Tooty looked on in hope (behind the wine glass) and of course was spoilt.. 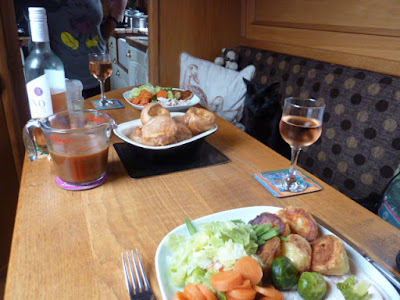 We had a relaxing afternoon chilling out with the footy..
Posted by Del and Al at 4:21 PM

Hi, nice to have caught up with you again.
Alls well on Adagio....... so far!
We have a blog too - vivatek.co.uk
And weather on weather.vivatek.co.uk
Hope the installation finishes soon and you can get out and put those new lithiums to work!
Cheers
Steve & Viv and Toby

Hi guys, good to see you. We're all finished now and it feels great to be cruising again! Glad the genny's working well. Have added your blog to our list. Sure we will see you again at some point....