Day ten of our Electrical upgrade

We woke up and checked the readings on the Solar MPPT Controller and it had burst into life as it was started by the suns rays. We had a frost on the roof and Del's insulated box around the batteries had worked, because the sensors showed 8 degrees and were allowing the batteries to take a charge.. These batteries won't take a charge below 5 degrees and are automatically shut down if its too cold..  It was another bright morning and the solar panels were already producing 250 watts.
The weather just got better and the panels hit 711 watts, the highest it has been, so the batteries were fully charged by lunchtime. 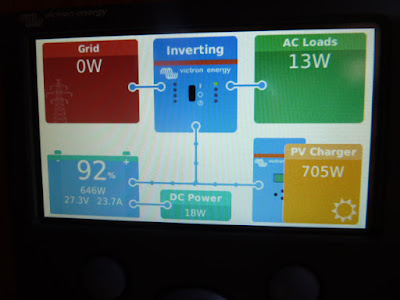 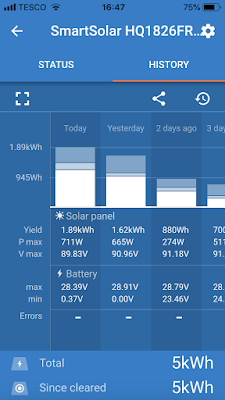 Del used the time to do some painting on the roof rails and while doing it Adrian, the marina owner, came over for a chat.. 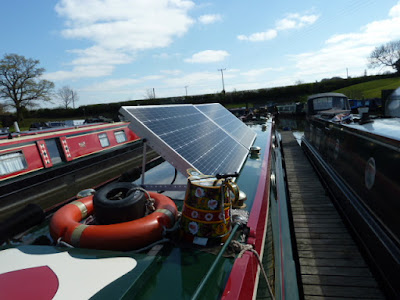 He told us that we needed a regulator and brush set as the alternator it had the wrong regulator in it .. Del couldn't remember the alternator ever being removed in ten years and told Adrian this.. Anyway Del asked them to check the price by ringing round for a reconditioned one or call Beta to see the price of their one..
He went away and came back 5 minutes later asking for the engine number so they could get the correct one.. While we had all the details out, Del just went through all the invoices collected on Derwent6 over the last ten years, and to his surprise there was an invoice from Beta for a regulator on the 60amp Domestic alternator..
This was required at the time when Al's dad was in hospital, and Del's mate Bernie came up to help move Derwent6. The domestic alternator light came on and we still had to get the boat back to a good mooring.. Del rushed down to Kent to join Al and help out, and ordered the parts required for Derwent6 then.. He went back and fitted them in a bit of a rush to get back down to Kent, as things weren't good..
Del had no memory of this and that's a bit scary, thank god for this blog which showed all this back in 2014. It just shows stress can do funny things to you and should never be ignored. http://derwent6.blogspot.com/2014/10/emergency-derwent6.html
So Del had to eat a bit of humble pie and explained that he had done the alternator five years ago.. This doesn't clear up the fact that it was all working fine when we came into the marina here at Springwood haven though.
They thanked Del for being so honest and did have some good news. They had got a price from Beta  and then got back onto the Alternator repair company to negotiate a better deal. To be fair Del had done the job before and knew how much all the parts cost and what was involved.. They re quoted and we decided to go with that as we wanted some form of guarantee when it was fitted and linked to the management system..
We are now waiting for the alternator to arrive and for Kevin to fit it. He is due back tomorrow and said he would come in to fit it and make sure the system was working properly.
Posted by Del and Al at 7:38 PM