Day nine of our electrical upgrade

So it was an early start for us as Kevin said he would be in at 8.00am. He got started on fitting the 24/24/35 battery to battery charger and made up all new wires to do it. A board had to be fitted in a tight space where Del kept his tool boxes, but Kevin managed to get it in.. 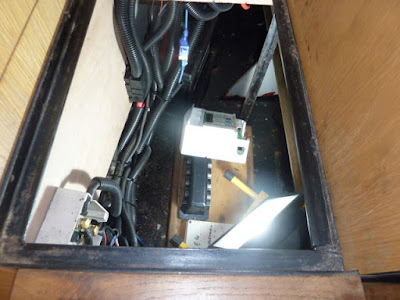 When starting the engine the charger burst into life, and it was programmed to charge lithium batteries, but it soon become apparent that the charging voltage was fluctuating, and the wrong lights were flashing on the charger as the load on the alternator altered. 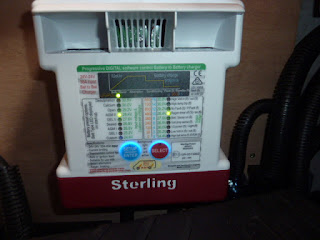 After more checks Del found out that the alternator was charging the batteries at a voltage of between 28.4 volts to 30.5 volts which was too high.. Kevin had another look and found when the Cyrix relay was disconnected, the voltage stabilised around 28 volts...
After some wiring testing at the alternator light, Kevin came to the conclusion that it must be the regulator in the alternator causing the problem.. So it was taken off and taken to an alternator specialist for testing. It wouldn't be ready for a couple of days. 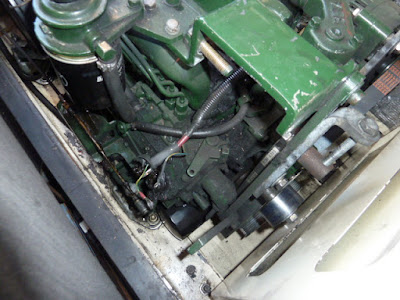 So the news is that we have a fantastic system fitted on Derwent6, but with no alternator to charge the batteries, and we still don't know whether this will fix the charging problem. Also Kevin is working abroad for two days so can't fit the alternator till Saturday morning.
The good news is that we have been OFF shoreline now for three days and the batteries are still at 80% (26.4v) in the morning, and the solar panels charge us back up to 100% (27.2v) by midday, so we haven't needed our engine to charge the batteries..  So they are right, Lithium batteries are great if you can sort out the charging!!!

Chuffed with our charged batteries we watched the football and when we went to bed the readings were back at 80%, but what was weird was that the solar controller had turned off and we didn't know why! We are still learning!

Electrics are a continuing mystery to me. Fortunately David understands them and I don't have to!
I'm sure you will get it sorted soon, and I am delighted that the solar is performing well - we really like ours on the boat, and in the motorhome we notice the effect when the sun isn't out!

Here's hoping we see you on the cut soon - we'll be underway from Debdale for a few days on about 29 April, and then from Mkt Harborough on about 10 May as we make our way swiftly through Crick and on to the Grand Circle.