We were up early for the Kiwi's and the Lions Rugby and a lovely big breakfast, BUT Tooty hadn't returned after a feast, just leaving us a tail on the towpath. After a long look around we had to blow out breakfast and Del had to watch the Rugby on Derwent6.
The plan was to move after the rugby but with no cat, Al wasn't going to move anywhere.. Being a Saturday, there were loads of dogs and walkers and just to put the icing on the cake a fun run round the lakes here.
It turned out to be busy all day and in the end we realised that we weren't leaving. Mark and Sian came back from their slap up breakfast and decided they would move on, and we waved our goodbyes. 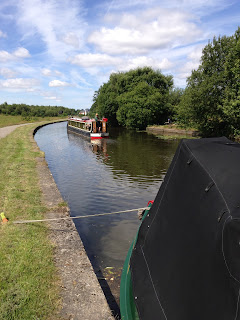 Al was out looking for Tooty every couple of hours and Del was worried about Al, so nothing got done really. It was too busy on the towpath to do anything outside and too warm to do anything inside so it was qualifying and the tennis for us. We had a lovely sunset to finish the day and Al went out again for Tooty. After walking a bit further down the towpath a scared cat came out of the bushes. Al was shaking with delight that he had been found. 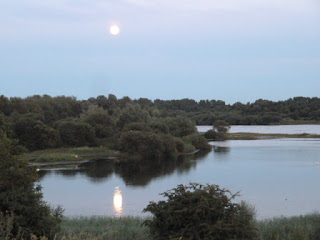 He came in and went to his bowl then he cried all evening to go out again, he must like it here. 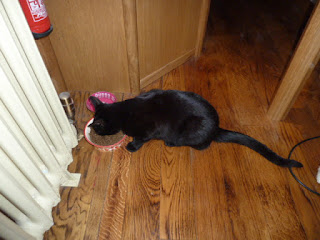 "Not a chance" Al said to him. We now have an early start again in the morning!
Posted by Del and Al at 9:58 PM