Water Required (or was that beer)

We had heavy rain last night and when we surfaced we were listing over a bit where the ropes had gone tight with the rise in the water levels...
It was still cold but the sun was trying to come out at 10.00am so we pulled the pins (well loosened the chains) and set off to Braunston. 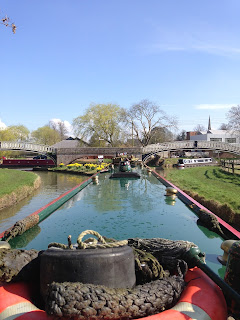 One of the reasons for moving was that we were getting low on water, and our first port of call was the water tap. 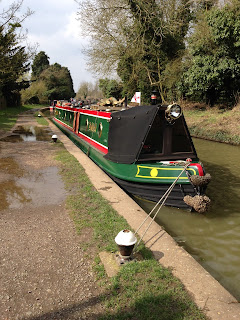 Al then walked up to the village store and butchers and picked up a few provisions while Del got rid of the rubbish and did some cleaning while the boat was still wet..
On Al's return we then walked round to AJ Canopies and picked up some cratch cover cleaner and spray which keeps it water tight. 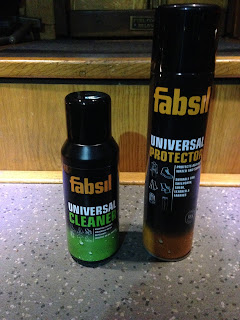 We then turned and found a mooring opposite the pub, very handy! It has still been very quiet on the cut and there were loads of moorings in Braunston, again very unusual. 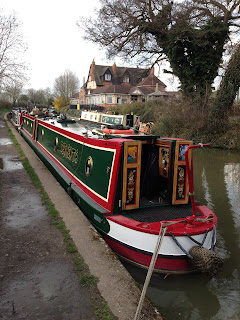 We had some lunch and then took a walk round the chandlers where we got some grease, rope and catches and also walked up the church where we lit a candle for Len, Del's Dad.. 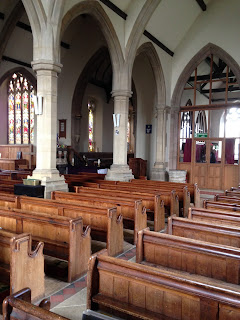 We sat reading for a couple of hours and then showered and walked over the pub. It was nice to have a slimming steak and salad with a few fattening beers and a bit of planning for what we want to do later in the year.. It does seem so strange now we don't have anything to worry about, (except Tooty) and we feel so freelance. We really need to do a trip this year, but where shall we go.. North I expect!
We got back to Derwent6 at 8.00pm and then went back to our reading and just chilled out.
Posted by Del and Al at 7:20 PM

So pleased to read your blogs. We do so hope to be able to get up to Cropredy next month for a few days to get Moore to Life up and running for the summer.

We're currently moored up at the top of Hillmorton Locks. I don't know what time you're setting off in the morning but if you're still coming this way and we're still here we'd love to catch up and can offer a very good a cup of coffee. Give us a call on 07495 664382.

Hi Del/Al, good to see you boating & blogging again. If you are heading North this year our paths may cross. We are leaving our Marina at Shardlow on May 1st heading for Llangollen, from there to Stourport and on to the Severn to Worcester then through to Birmingham via Tardebigge stopping at the Black Country museum before making our way back to base for end of June. Out again first or second week in August, heading for Liverpool. Hope to see you sometime this year
Kev & Ann (Nb Rock n Roll)

Hi Chas & Ann, thank you, its good to be back blogging. Bet you can't wait to get back to the boat especially with all this lovely spring sunshine! Lets hope its a good summer

Hi Malvern & Laura, have sent you a text, hope to catch up again

Hi Kev & Ann, hope to see you too, we're heading north at the end of May, also Black Country museum, Birmingham and Liverpool, so we should see each other at some point!