Cruising with the cat

After a bit of a lazy day yesterday we decided we should move today. The sun was beaming through the portholes and Tooty was in after a night of being out on the tiles..
He has been marvellous, and turned into a good boat cat, he meows to go out through the cratch doors (no cat flap on Derwent6) and then once we've gone to bed, meows at the porthole window in the bedroom to come back in.. We don't know how he knows which boat to come to or how he knows which porthole to meow at, but he does. When he comes in he purrs like a traction engine and seems so pleased with himself that he has found his food and the lovely warm log burner in the corner..
Anyway, we set off in the sunshine but the wind was blowing well and bitter, the good news was it was blowing from behind us so with Derwent6 just off Idle we cruised along nicely.. 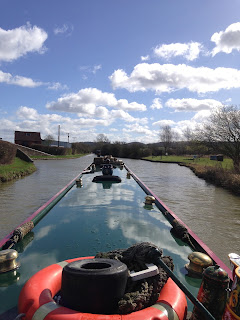 It was a bit tricky slowing down past moored boats with the washing machine on, as you have to keep the revs up, but we managed it..  The canal looks so different when the sun shines as you get the feeling of spring, just round the corner.. 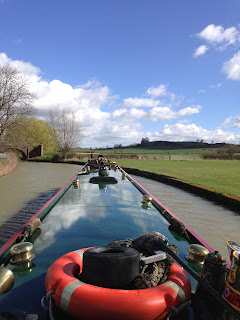 We found a nice mooring and Tooty heard the rattle of the chains as we tied up.. he gets so annoyed when we move as he has just made his territory where we are and then has to do it all again when we stop in a different place lol.. 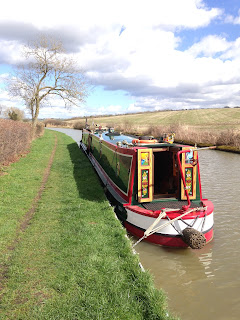 He rubs his scent up and down the fenders along the gunwale and then steps off doing the same in the bushes.. 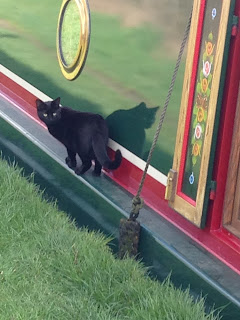 Al got out the washing line and soon had things blowing in the breeze, as Tooty watched on.. 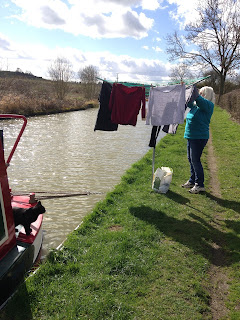 Del chopped up the wood that was on the roof and then went on the hunt for more.. he came back with some nice Hawthorn which will do nicely through those cold spring evenings..
Posted by Del and Al at 5:22 PM